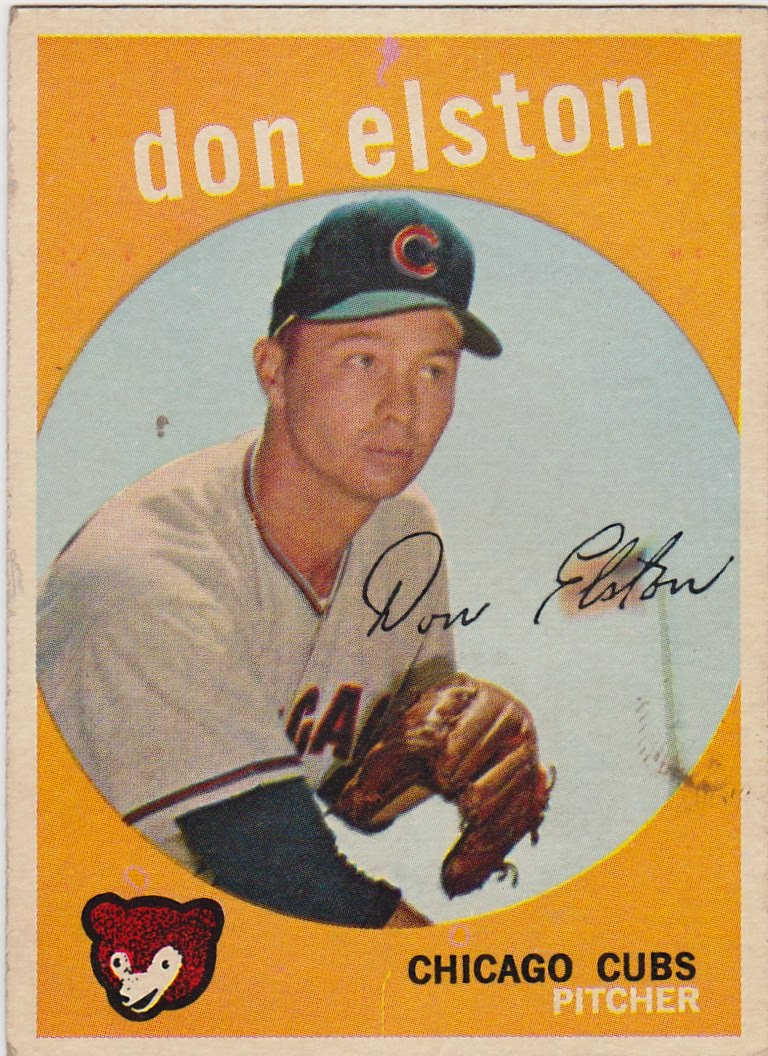 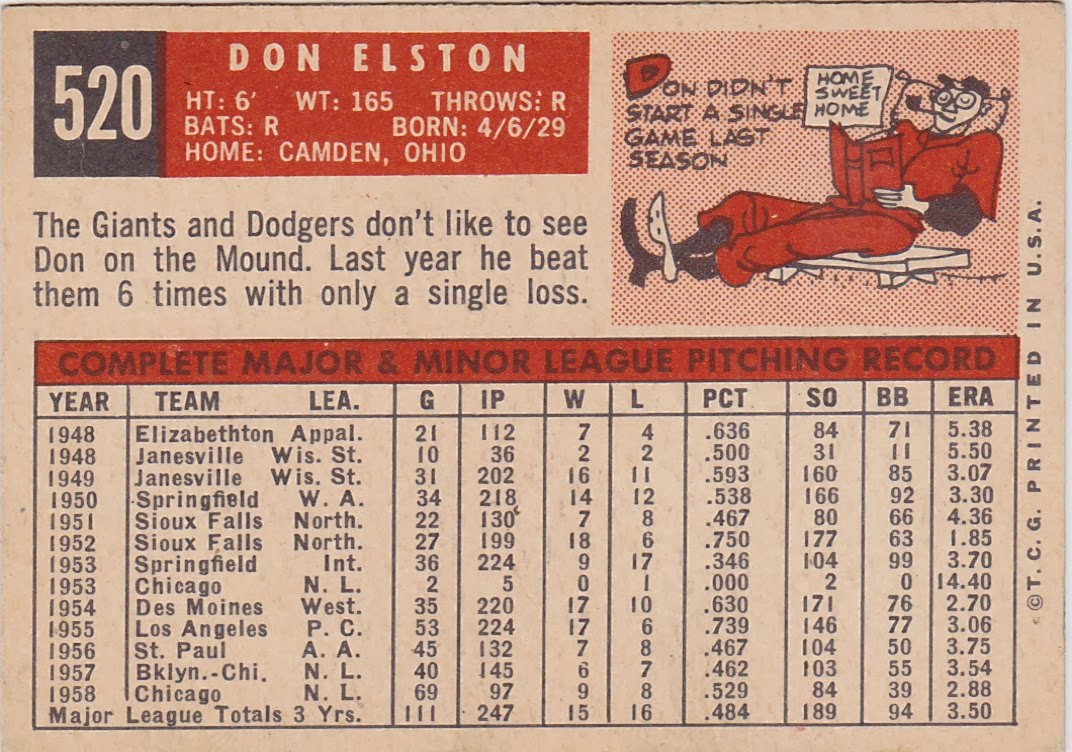 Ohio native Don Elston spent eight seasons as a starting pitcher in the Cubs' farm system after he signed with them in 1948. Those years were pretty impressive as a whole and one wonders what kept him 'down on the farm', especially in an organization as mediocre as the Cubs were at the time. The answer is likely his lack of control.

He did get a brief two game look at the end of the 1953 season and was banged around pretty hard. After pitching (and going 17-6) in the tough PCL as property of the Cubs in 1955 Elston was dealt to the Dodgers. Another season in AAA followed and then he made the Brooklyn staff in 1957.

That didn't last long however and after just a single one inning appearance in Ebbets Field in May he was traded back to the Cubs. He finished out that year as a starter/reliever on Chicago's North Side and then in 1958 he emerged as one of the better relief pitchers in the NL. He led the league with 69 appearances, had 10 saves (for a club with just 72 wins) and teamed with lefty Bill Henry to form an effective left/right closing combo.

In 1959 he made the NL All Star squad, pitched an inning and got the save in the first of the two ASGs played that year. He allowed a two out single to Nellie Fox in the top of the ninth at Forbes Field but got Harvey Kuenn to pop out to end it and preserve the NL's 5-4 win. that season he had career highs in wins (10) and saves (13). The save category for pitchers was reportedly created by Chicago newspaperman Jerome Holtzman as a way to show Elston's contributions. Holtzman saw Elroy Face getting wins after blowing leads with the Pirates and thought Elston's work as a reliever was better and deserved recognition.

Elston remained the club's workhorse for several more seasons although his numbers never again matched his '58/'59 run. After spending the 1965 season pitching in the minors Elston retired as an active player although he did manage briefly in the Cubs' system. He then spent the rest of his life in sales and working on behalf of Chicago area charities including the Chicago Baseball Cancer Charities organization for which he served as co-chairperson with another Chicago pitching standout, Billy Pierce.

Elston died at the age of 65 from heart failure in 1995. He had a long history of heart problems extending back to the beginning of his playing days, a fact he never shared with his teammates.

His Chicago Tribune obit has a lot of background and stories from his playing days. This big chunk of that work is worthy of being repeated here:

Don Elston, who died Monday at the age of 65, was like many pitchers of his time. He couldn't get Willie Mays out. Having exhausted his usual repertoire, Elston tried a spitter. Mays hit it over the fence in left center. Next time he threw a knuckler. Again, Mays connected-into the center-field bleachers, a few feet below the Wrigley Field scoreboard. "I don't know what we're going to do with him," catcher Dick Bertell told Elston."And Don said, `Tell him what's coming. He won't believe it, anyway.' "And so Bertell, when he went into his catcher's crouch, asked Mays: "What do you want to hit?"

As Bertell recalled Wednesday, Willie didn't reply. "He just gave me a funny look. So I said, `It's going to be a curveball.' And for the rest of that at-bat, I called every pitch."Did Willie take Elston deep again?"No," Bertell replied. "He popped up. From then on, I wouldn't say Don had Willie in his pocket but he didn't get any more big hits off him."