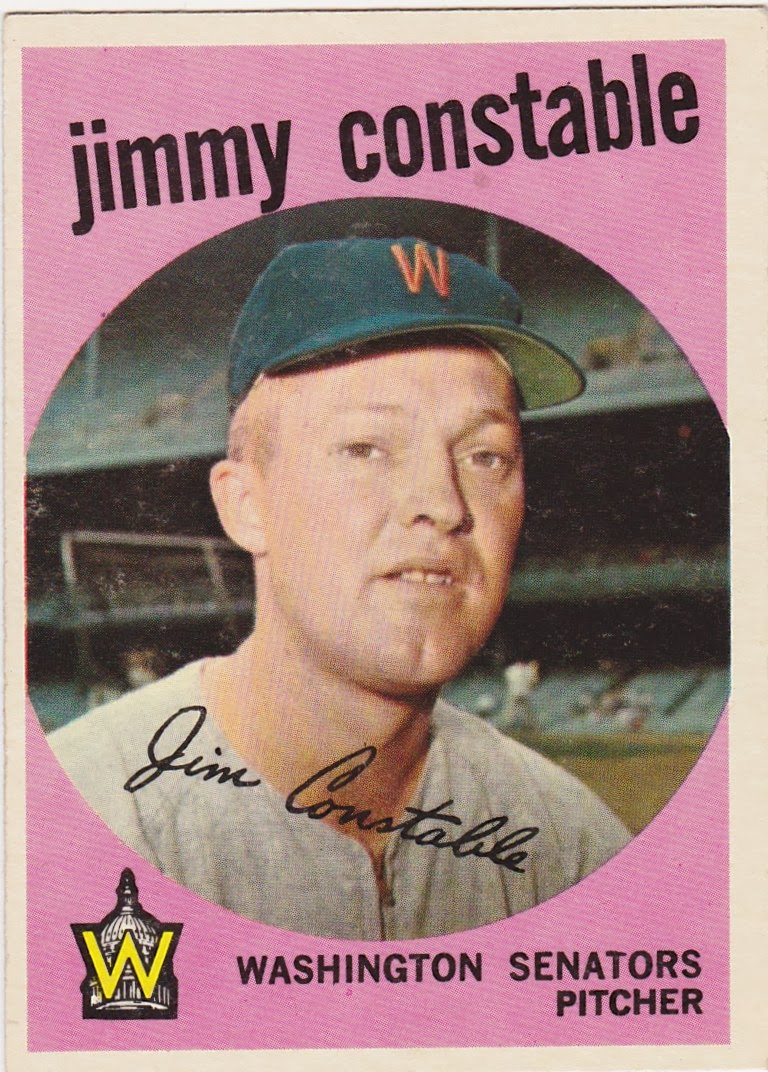 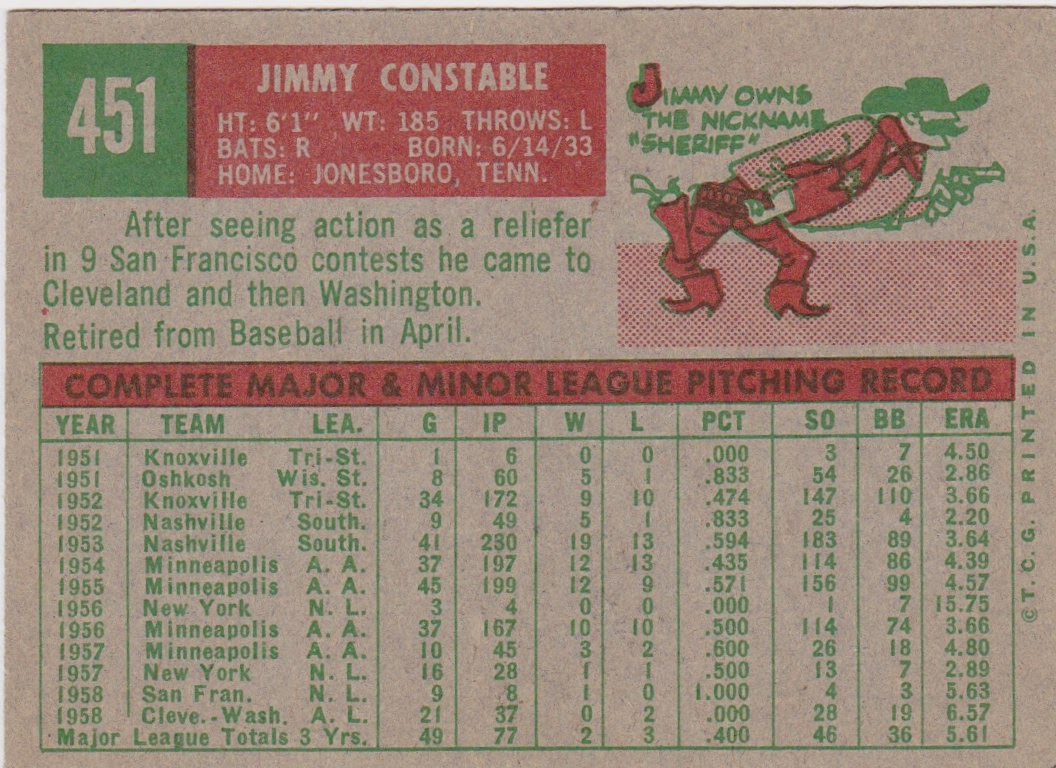 NOTE: I'm now down to less than twenty cards to post in this set which I've come to love so much. After Mr. Constable here I have another pink card, a black framed one, one last All Star card and a superstar Hall of Famer among those remaining. I will be checking to make sure that I haven't missed one but if not I should be wrapped up by Opening Day.

It took Jim "Sheriff" Constable five and a half years to make it to the majors after signing with the New York Giants in 1951. He was a minor league workhorse as a starter in the Giants chain winning as many as 19 games in a year. He got a call by the Giants in mid-season of 1956 and was knocked around in two of three appearances and returned to the minors.

The Tennessee native was again with the Giants in August of 1957 with better results. He split a pair of decisions and had a 2.87 ERA in 28 innings out of the bullpen. During the 1958 campaign he was waived by the Giants in June, was picked up by the Indians who waived him in July when he was signed by the Senators.

It was following that 1958 season while pitching winter ball in Cuba that Constable suffered what is described as a 'mental breakdown' that eventually caused him to be out of the game for three years. His Baseball Reference Bullpen page quotes him in Steve Bitker's book The Original San Francisco Giants:


Constable said, "My father was manic depressive. It is inherited. It was through the heavy stress I was under in Cuba after the whole year I had, being with three different teams, then down there with Castro taking over and people disappearing, I had quite a breakdown."

After his layoff and recovery Constable was signed by the Braves in 1962. After pitching for their AAA club in Toronto (his other numbers are better than his 9-14 record) he was given a shot in September to return to the majors. He was given a start for the Braves against the Pirates on September 22 and rewarded the team with a five hit complete game shutout.

That wasn't good enough for the Braves to keep him around though and he was waived and claimed by his original team, the now-San Francisco Giants, who used him mostly in the minors for two years. He got a few innings with the Giants in 1963 but was out of baseball for good after that.

Upon retiring Constable returned to East Tennessee, and he worked as a control analyst at Magnavox for 15 years. He then returned to college for an education degree and taught in the the Washington County, Tennessee schools. Second consecutive featured player who turned to teaching after baseball.

Jim Constable died in 2002. A few weeks later the local paper had a feature on him. They sort of skirt the metal illness issues he suffered by referring to 'health problems' and his 'nervous condition'. He is pictured here posing in Yankee Stadium and framed in pink. Based on his timeline he was out of baseball when this card was issued. His next (and only other Topps card) came out in 1963 when he had returned. 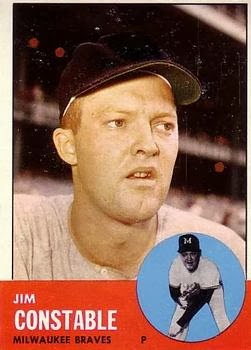 And I found this signed postcard for sale on eBay. He looks like a kid, doesn't he? 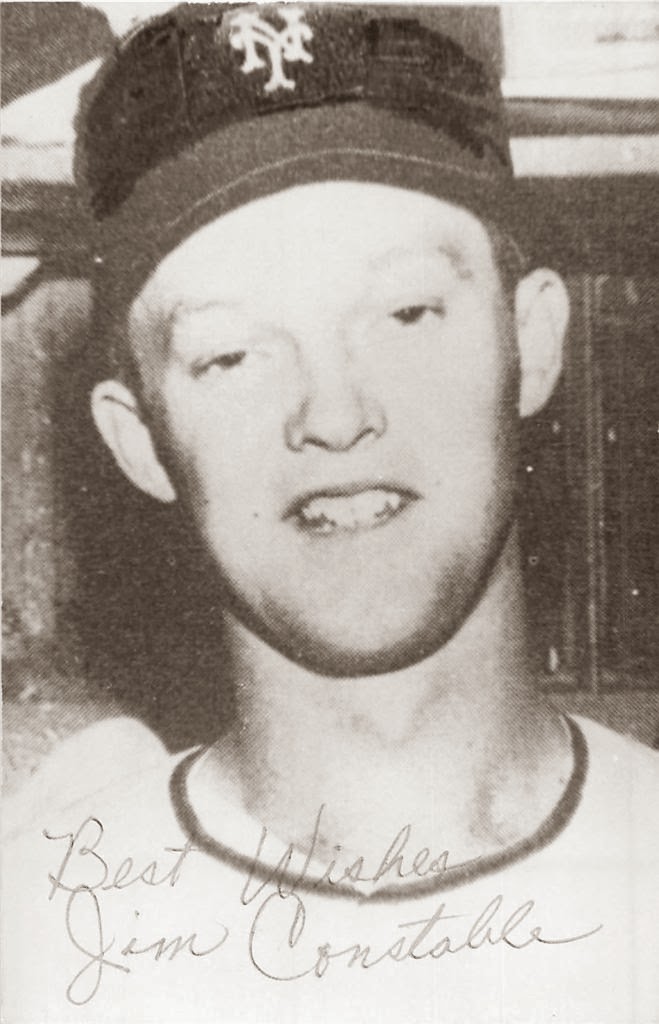