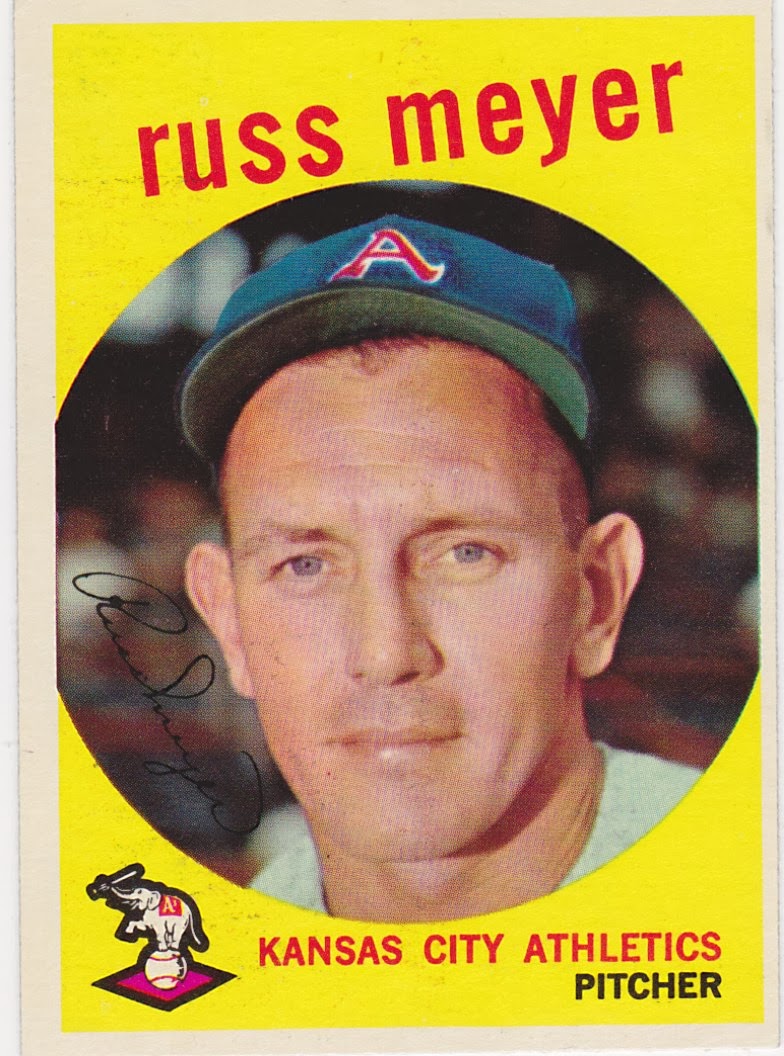 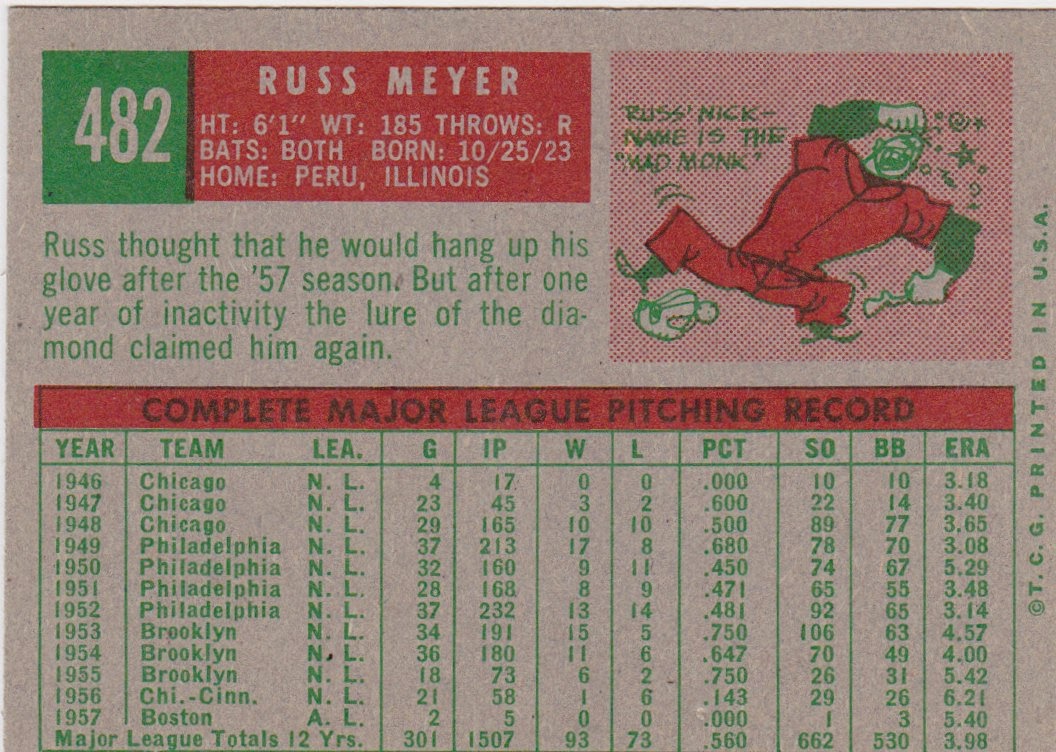 Ol' Russ Meyer looks benign in this, his last Topps card. But in his heyday he had a reputation for being more than just slightly 'off the wall'. He had issues with anger and an inability to keep himself out of trouble. Not legal trouble but, well, 'baseball trouble'. I mean his nickname was the 'Mad Monk'... and he got it as a schoolboy so that should tell you a little about him. 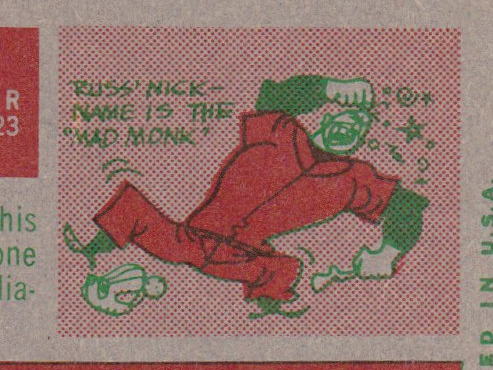 Pitching in his hometown of Peru, Illinois Meyer attracted scouts and he signed with his 'close to home' club, the White Sox, in 1942. After a season in the minors he was called to military duty and ended up on a service baseball team. He collapsed on the mound during one outing and was diagnosed with a burst appendix. Complications kept him in the hospital for months and got him a medical discharge.

Returning to civilian ball Meyer signed with the Cubs (apparently the White Sox had not listed his absence correctly) and moved up through their chain as a starter/reliever and got a quick big league look in 1946. That was enough to earn him a spot on the club in 1947 and he spent two years in the North Side winning 10 games in '48 after being given a spot in the rotation.

He was sold to the Phils after that and he won 47 games in four years including a 17-9 year in 1949. He pitched briefly in two games in the 1950 Series against that Yankees. He took the loss in Game Three when, after entering a 2-2 tie in the bottom of the ninth, he got two quick outs before allowing three straight hits and the Yanks' winning run.

Meyer was involved in a complicated four team deal prior to the 1953 season and found himself in Brooklyn pitching for the Dodgers. His antics no doubt amused the fun loving Brooklyn fans. From his SABR bio:

[Robin] Roberts in his autobiography recalled an incident in 1953, after the Phillies traded Meyer to the Brooklyn Dodgers. Pitching against the Phillies in Connie Mack Stadium, Meyer walked Richie Ashburn with the bases loaded, forcing in the go-ahead run. Meyer charged off the mound to protest to umpire Augie Donatelli. Meyer’s language got him ejected by Donatelli. But he returned to the mound and just refused to leave until manager Charlie Dressen came out to get him. Finally Russ stomped off the mound. As he stomped off the mound he flipped the rosin bag into the air with disgust. The rosin bag flew 30 feet in the air and came down directly on Meyer’s head. White powder flew everywhere, and even Monk had to laugh a little, Roberts said.Monk wasn’t through, however. When he got to the dugout, Roberts said, he yelled at Donatelli and grabbed his crotch. Unfortunately, the game was the television Game of the Week, and a camera in the dugout caught the whole episode and displayed it to the nation. The network switchboard lit up like a Christmas tree. For about the next ten years baseball had a “Meyer” Rule that forbade cameras in the dugout. And Meyer was fined and suspended for three days, one of at least three suspensions he received during his career.

With the Bums Meyer went 26-11 over his first two seasons but his other numbers don't look as impressive and the strong Brooklyn teams helped that win total. He won and lost World Series' with Brooklyn. In the '55 series he entered Game Five with the bases loaded in the third and promptly gave up a grand slam to Mickey Mantle.

Fresh off the '55 Series win he was traded to the Cubs and spent the next few seasons bouncing around the majors with three teams and had a minor league stint before leaving the game and not pitching in 1958. Meyer returned to pitch for the A's in 1959 and he is airbrushed into their cap for this card. He was released in July of that year after 18 appearances.

He went on to coach for the Yankees in their minor league system and for a season as bench coach. He retired in 1992 to operate a bowling alley.

His N. Y. Times obit (he died in 1997) contains this interesting tidbit:


In June 1981, Meyer returned to Brooklyn with his former teammates Carl Erskine and Sandy Amoros to promote a quest to bring the Dodgers back from Los Angeles. But in renewing old times, he lost his treasured rewards from his Dodger days: He was held up at gunpoint and had his 1953 and 1955 Dodger World Series rings stolen. At least it did not happen in Brooklyn -- the scene of the crime was Lexington Avenue and East 25th Street.

Meyer's SABR bio is, as you might expect, an interesting read.

Dodger history fans might enjoy this photo archive site I stumbled across while looking for Meyer facts. Here is one photo and the text that accompanies it: 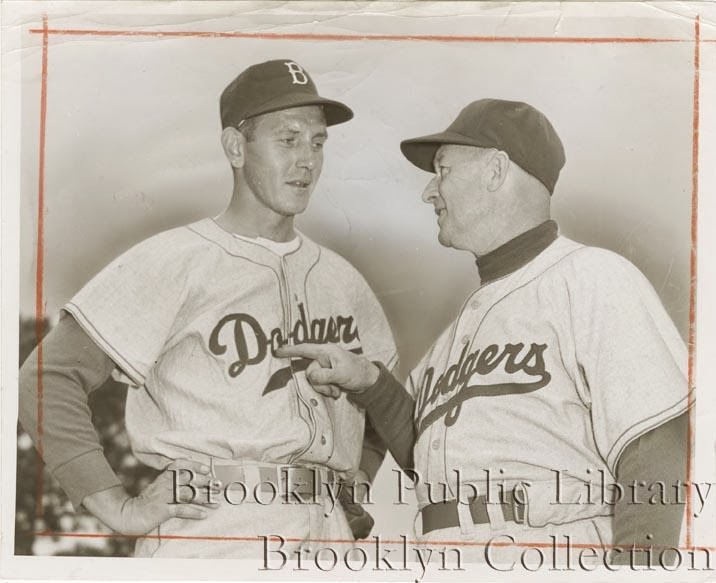