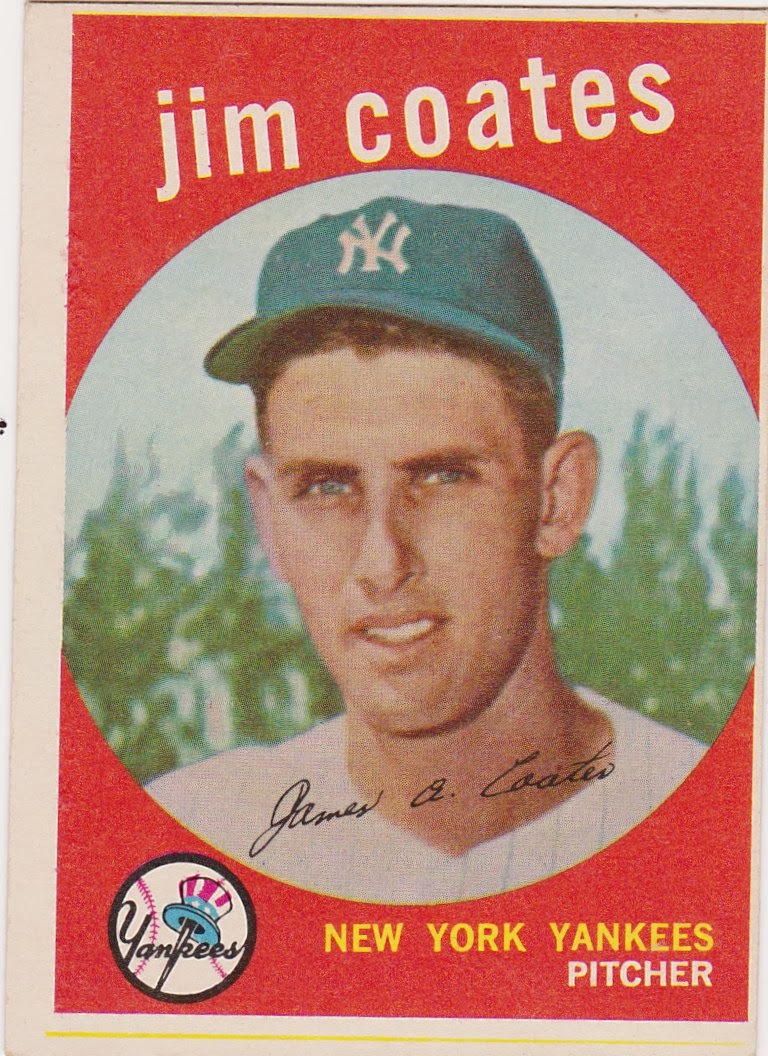 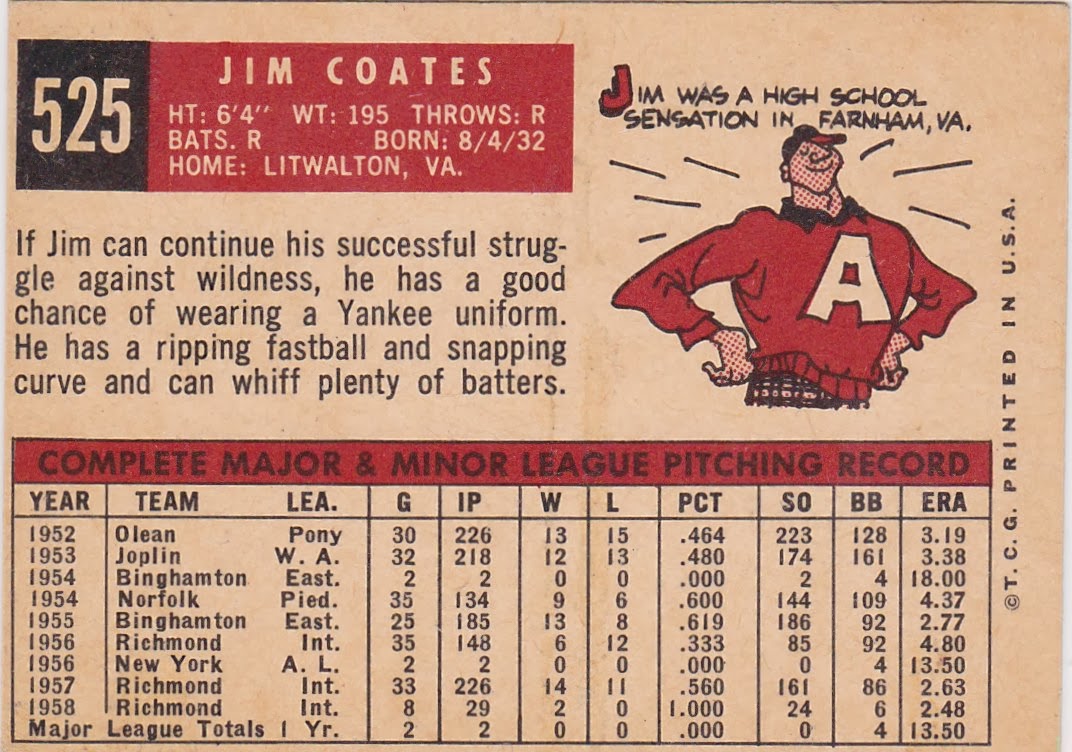 The back of Jim Coates' '59 card states he was a 'high school sensation' in Farnham, Virginia. That may very well be true but it doesn't tell the same story that Coates himself does in his memoirs, "Always a Yankee: A Pitcher's Story". Fact is that Coates dropped out of high school at 16 to work cutting trees and pitch in a semi-pro league against older and more experienced competition.

His skills earned him a Yankee try-out and later a contract offer. So in 1951 the tall, thin righthander found himself beginning to pitch his way up the Yankee chain. He spent five seasons in the minors and finally got a two game peek in 1956 before returning to the minors for '57 and suffering a broken arm which cost him most of the 1958 season.

Coates made the Yankee staff in '59 and won six games while showing his versatility by filling roles as short man, long reliever and starter. He hit his stride in 1960 and won 13 games against three losses in 35 games, 18 of them starts. He was named to his only AL All Star squad and pitched a couple of innings in that year's first of two ASGs. Along the way he picked up his nickname of 'Mummy' for his mound appearance which has been described as 'funereal'.

He gained some unwanted notoriety during the 1960 World Series against the Pirates. In the deciding seventh game of that wacky Series he failed to hold a lead in the eighth inning. He had relieved Bobby Shantz following the "pebble grounder" that hit Tony Kubek in the throat. Coates, entering with two runners on and none out got two outs and forced Roberto Clemente to top a roller towards the right side of the infield but Clemente beat the play at first. Coates has been blamed, probably unfairly as has been shown, for failing to cover the bag on a play that would have ended the inning with the Yanks still ahead. Hal Smith then followed with a home run that put the Pirates up two and chased Coates.

The Yanks managed to tie the game up in the ninth but Bill Mazeroski's homer sent the city of Pittsburgh into delirium. Coates survived and pitched as well or better in 1961 and he picked up World Series rings with New York that year and the next. This blog page has an interesting account of that 1960 Series' 7th Game including a couple of video clips.

In the spring of 1963 the Yanks traded Coates to Washington. After a season there he went to the Reds and then the Angels.  He never matched his Yankee success but pitched through 1970 in the Angels' system before retiring to work as an electrician.

He was referred to quite a bit in Jim Bouton's book Ball Four. Bouton said "Coates could pose as the illustration for an undertaker's sign. He has the personality to match..." Coates' grandson, Aaron Pribanic, was a minor league prospect for the Mariners and Pirates who pitched for the University of Nebraska-Lincoln.
Posted by Commishbob at 6:00 AM