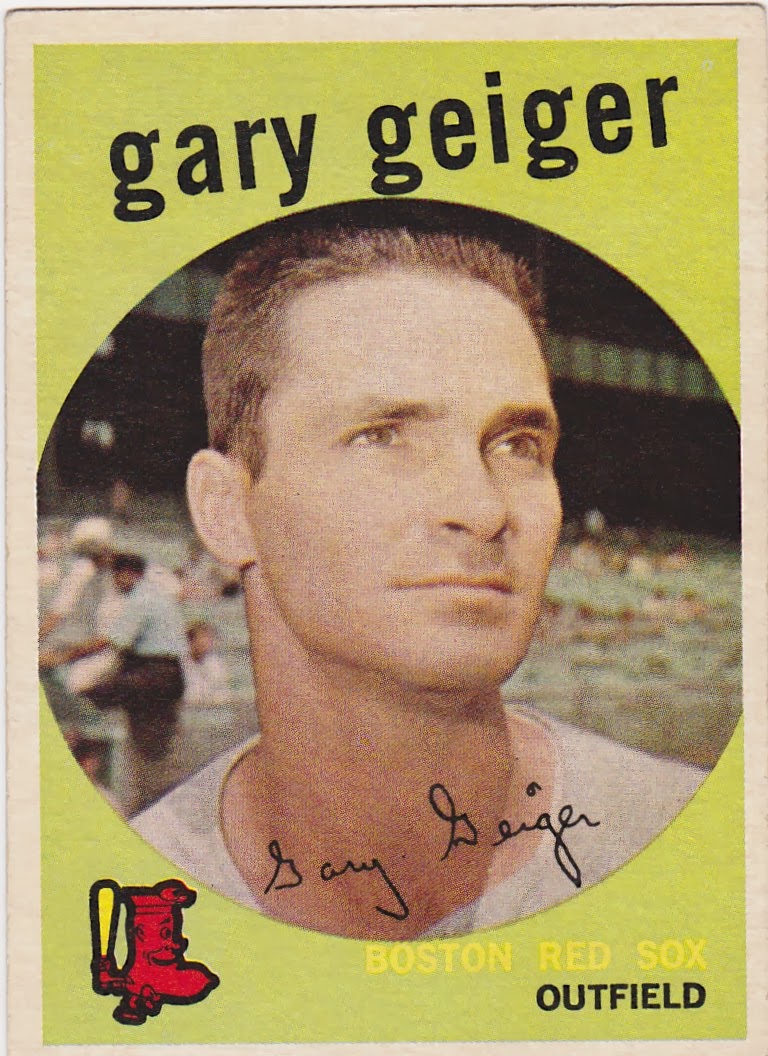 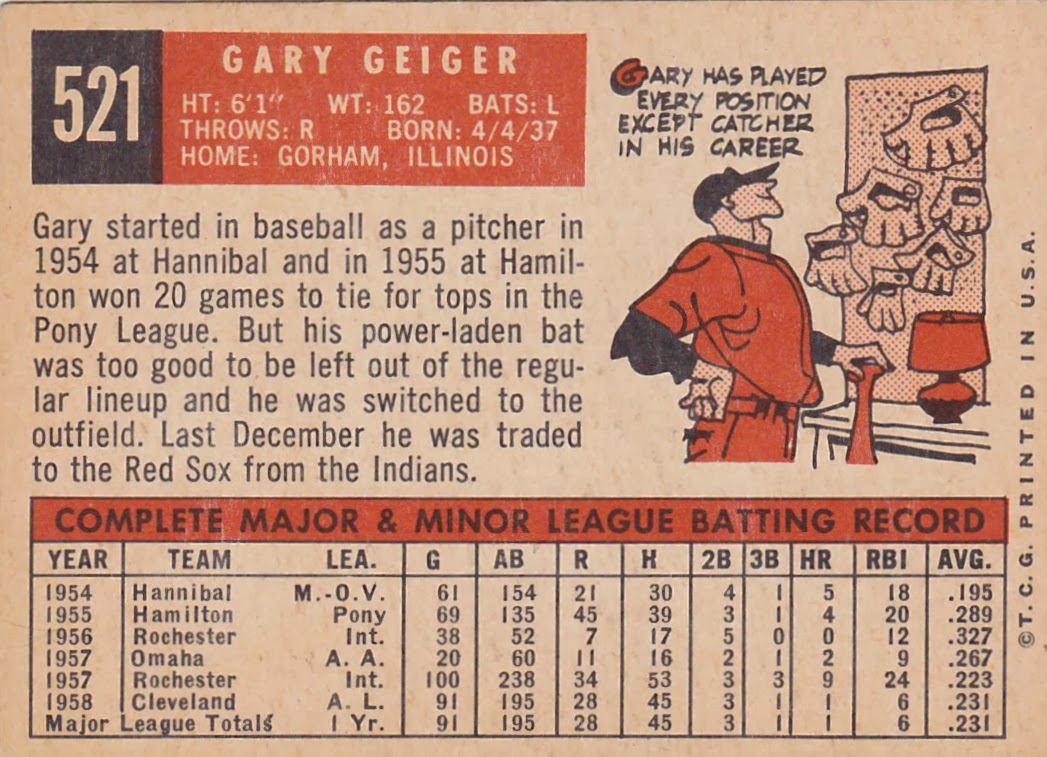 And we are back to some high number series cards with Gary Geiger. Black replaced green on the reverse of these high numbers. Elsewhere it has been stated that the switch was done as part of Topps' efforts to gear up for the printing of their 1959 football cards. Sounds logical to me.

Gary Geiger was a standout player for Gorham high school in rural Illinois and was signed by the St. Louis Cardinals in 1954. He began as a pitcher and, after a rough first year, was a twenty game winner in 1955. He was having some success as a reliever in '56 when the Cards decided that given their pitching depth and Geiger's bat, speed and continued control problems as a hurler that he would help them more as an outfielder. And so he was switched.

He struggled with his hitting at the AAA level in 1957 and the Cards ended up exposing him to the Rule 5 draft that winter. In an interesting twist it was Frank Lane who, as Cardinal's GM made the decision to risk losing Geiger....and it was the same Frank Lane who, having taken the same position with the Cleveland Indians, selected Geiger in that draft in his first act with his new club.

Geiger hit .231 as the fourth outfielder with the Indians in 1958, a year during which he had to remain on the big league roster or be returned to St. Louis. In winter ball later that year he injured his neck and came home to the states over Lane's objections. He was then traded to the Red Sox where he would play next to two Hall of Fame outfielders, Ted Williams and Carl Yastrzemski over the course of his seven seasons in Fenway.

Geiger turned out to be injury prone and had trouble putting full seasons together. But he had speed and some power and was even able to hit over .300 in 1960 playing in nearly half the games. But much more was expected of him given the talent he flashed and in the end the Sox let him get drafted away by the Braves where he spent two seasons. Geiger finished his career with a couple of years in Houston after spending 1968 in the minors.

In 1996 Geiger died of cirrhosis of the liver at the age of just 59. He had lived the last 20 years of his life battling alcoholism. His family says his issues were a result of his fear of flying. He used drink to calm his nerves and in the end the habit caught up with him.

Gieger's SABR bio is the 'go to' place for more insight on his interesting life and career. This obit from a local paper is a quicker but also interesting read. Lots of stories from his family and friends in that one.

This card and the other 'light green' card (the previously posted #545 Tom Morgan) in the high number series have a distinct 'lime green' look about them. It's certainly a different shade of light green than that which is seen on the lower series cards. For a comparison here are the Geiger and Dale Long cards scanned side by side. The difference seems more pronounced when viewing the cards in person but it is plain enough to see in the scans.