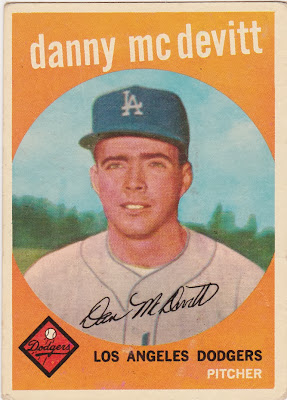 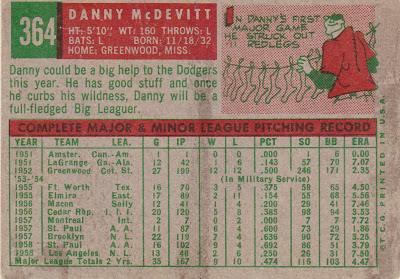 Danny McDevitt is the first Dodger that I've posted for quite awhile. Looks like a spring training shot that's been 'painted' over. Probably a Vero Beach photo.

McDevitt signed with the New York Yankees late in 1951 out of St. Bonaventure College and reported for work that September to the Yanks' low minor league clubs. He got into 7 games and was whacked around pretty good on the rare occasion he got the ball over the plate. Apparently the Yanks decided that they had made a mistake and released him.

McDevitt signed with the Dodgers that off season and had a much better year in their system but he still had control issues as evidenced by his 171 walks allowed in 199 innings. Then it was off to the military for a couple of years. When he returned in 1955 he began a two and a half season stretch during which he continued to struggle with control. His work in 1957 was good enough however to earn him a promotion to Brooklyn and secure him a spot in the rotation alongside Don Drysdale, Johnny Podres and Don Newcombe. In his first start on June 17 he pitched a complete game against the Reds allowing two runs on seven hits and fanning 11. He went on to a 7-4 record with a couple of shutouts that year.

One of those shutouts came in the very last game ever played in Ebbets Field. McDevitt handcuffed the Pirates that day on five hits. A brief video of that final Ebbets Field out was on You Tube and I've posted it here:

McDevitt's recollections of the game are featured in his L.A. Times obit:


"It was just another game, as far as I knew," McDevitt told Times columnist Jerry Crowe in 2007. "All the older guys – Pee Wee [Reese] and Duke [Snider] and those guys – seemed to know the facts, but I didn't know.
"I couldn't believe that after working my butt off to get to Brooklyn that I would be going back to another minor league town, which is what L.A. was then."


A brutal start to the '58 season earned McDevitt a demotion to the minors and when he was recalled in August he wasn't much better. 1959 was McDevitt's 'bounce-back' season as he went 10-8 in 39 appearances including 22 starts. He earned four saves as well. The Dodgers and Braves tied atop the NL standings that year and McDevitt drew the first playoff game assignment. He was KO'd in the second inning but the Dodgers won the playoff series and went on to win the World Series. McDevitt didn't pitch against the White Sox.

He continued his up and down trend with a poor 1960 season. He was sold to his original team, the Yankees that winter and was traded to the Twins in June. He pitched for the A's in 1962 and was out of baseball as an active player later that year. He went on to work as an umpire in the minors and later sold real estate among other jobs.

A Google search turned up a book on Cuban Winter League baseball that featured a story of an incident between McDevitt and an umpire that had some serious consequences. I also found a neat picture of McDevitt in Ebbets Field. 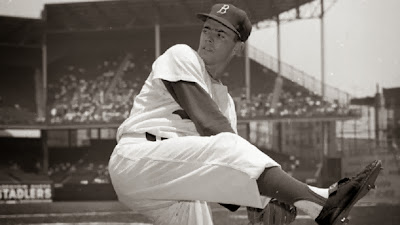