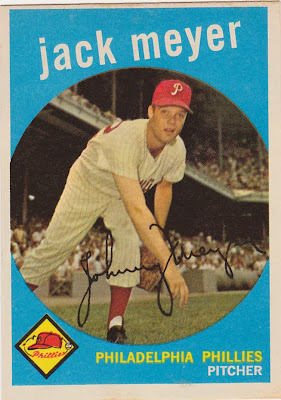 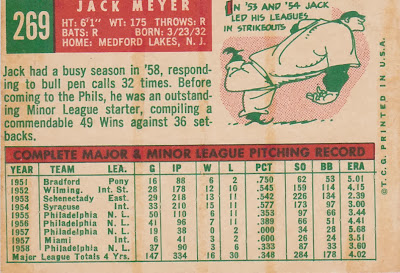 Jack Meyer was a hard throwing right-hander who was originally pursued by the Yankees but decided to attend Wake Forest University instead. I couldn't find his name among a list of letter winners on their baseball site but those type of things are often incomplete. In any case in 1951 Meyer was signed by the Phils and put together some impressive seasons as a starter as he rose through their system.

The Phils put him on their big league roster in 1955 and used him out of the bullpen for the most part. He rewarded them with a league high 16 saves and finished second to Bill Virdon of the Cardinals in the Rookie of the Year balloting.

Meyer would never again approach those first year numbers. He picked up only five more saves over the rest of his career as the Phils made him into a middle reliever. He was 24-34 over the course of six seasons in Philadelphia before back problems forced him out of baseball at the age of 29 after one 1961 appearance.

He died at the age of 34 of a heart ailment in 1967. His son, also called 'Jack' was well know in the sport of surfing and related industries in the Northwest. He too died of heart problems. He was only 53 when he passed away in 2007.

Meyer follows Seth Morehead as the second consecutive Phillies pitcher to be shown here on the '59 Topps Blog in a Connie Mack Stadium photo. Looking closely at the two cards shows that they were almost undoubtedly photographed on the same day. The banner on the upper deck railing to the right of each of them is identical.
Posted by Commishbob at 6:00 AM