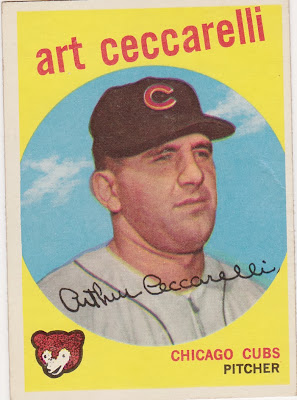 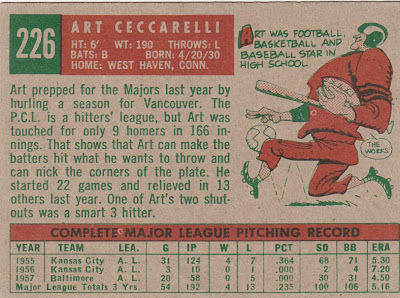 Lefty Art Ceccarelli signed with the Brooklyn Dodgers in 1948 and pitched for four seasons in their minor league system and squeezed in a couple of years of military service, too. He never made the Bums roster and was sold to the Yankees in 1954 before being drafted away by the A's later that year.

He made 16 starts among 31 appearances in his rookie season of '55 for Kansas City and went 4-7 with a high ERA. He spent the next season mostly in the minors but managed to lose one decision for KC. He was traded to the Orioles and went 0-5 in 1957, pitched well in the minors in 1958, was drafted by the Cubs and spent the first part of 1959 in their system.

Ceccarelli was brought up by the Cubs in July of that year and won his first four starts, three with complete games and one on a shut-out. Then hard times hit and he finished the year 5-5. He opened the 1960 season with the Cubs but was traded to the Yanks in May and ended his career in the minors after the 1963 season. He was 9-18 for his careen with an ERA of just over 5.

After baseball Ceccarelli returned to his native Connecticut and taught and coached high school for many years and coached baseball at Southern Connecticut State University. He passed away in July, 2012.

This card uses an airbrushed version of his 1958 Topps on which he is shown in an Orioles uni. 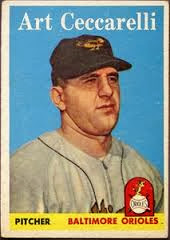