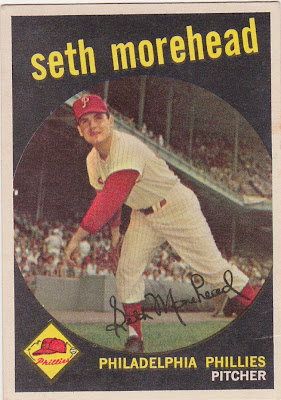 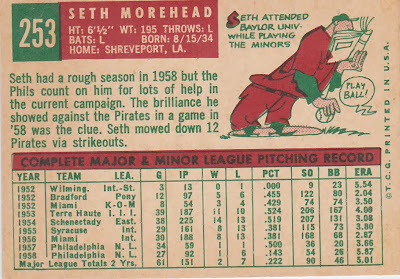 In that game on September 29th, Morehead's first career start and first win, he hurled a tidy four hitter as the Phils won, 2-1. Campy pinch hit for Dodger starter Roger Craig in the top of the eighth and flied to center. (Side note... Sandy Koufax pitched the bottom of the eighth to become the last man to throw a pitch in a Brooklyn uniform.)

Up until that point in his rookie season Morehead had pitched 33 times in relief with a loss and a save. He finished the year with an ERA of 3.68 which was down from well over 6 in mid-July. Prior to that season he had spent five seasons as a starter in the Phillies' system following his signing out of Shreveport, Louisiana in 1951.

Morehead made eleven starts for the Phillies in 1958 and was treated pretty roughly by NL hitters. His '59 numbers were trending the same way when the Phils moved him to the Cubs in May. His work that year for the Cubs produced the similar results but in 1960 he improved significantly. Although he was only 2-9 on the North Side appeared in 45 games and had his best WHIP and his ERA was below 4.00 for the first time since his rookie year.

Traded to the Braves on the eve of the 1961 season, Morehead picked up an early season relief win but he was ineffective otherwise and by late May he was in the minors. One last appearance came in September of that year and then he was back in the minors for two seasons before retiring.

After baseball Morehead completed his degree at Baylor University and was in the finance/insurance business for 36 years before he retired for good. In this book excerpt writer Willie Morris tells a good story of meeting him at a banquet many years after Morehead had fanned him four times in a Louisiana youth league championship game.