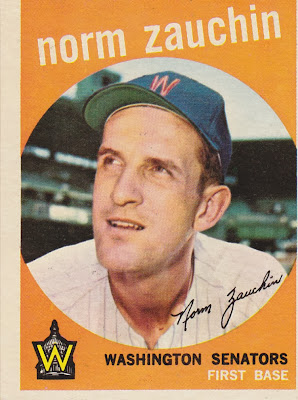 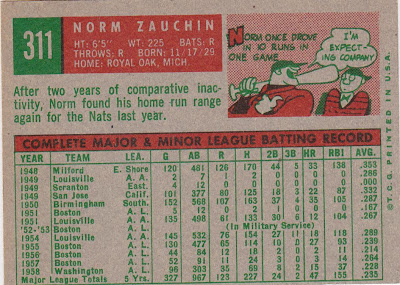 Big Norm Zauchin, the pride of Royal Oak, Michigan once had a dream of starring for his hometown Detroit Falcons of the brief lived Basketball Association of America. But when that league folded he set his sights on his 'other' sport, baseball, and the Detroit Tigers. In 1948 he was promised a contract by well known Tiger scout Wish Egan. But Zauchin ended up waiting fruitlessly for Egan to follow-up and decided to strike a deal with the Boston Red Sox instead.

He climbed steadily up though the Sox chain as a power hitting first baseman and got a taste of the majors in 1951 before spending two years in the military. He returned to baseball in '54 with another year of seasoning and made the Sox in 1955. He took over the first base job a few weeks into the season and went on to hit 27 homers and drive in 93 runs. He managed to bat only .239 and led the A.L. in strike outs but overall he was impressive enough to garner Rookie of the Year votes, finishing third behind winner Herb Score and his teammate Billy Klaus.

Like Klaus, he has credited another service returnee, the great Ted Williams, with showing him how to be more selective and become a better hitter. On May 27 of the 1955 season Zauchin had his best game as a major leaguer going 4 for 5 with three dingers and a double and driving in 10 runs in a 16-0 bashing of the Senators. Despite all that Zauchin lost ground career-wise in the next few seasons.

He averaged about 100 plate appearances the next two seasons, suffered some injuries and was traded to the Senators before the '58 season. He had a hot start with the Nats but when his bat cooled off and he missed time with an injury his commitment to the club was questioned my manager Cookie Lavagetto. By the following May, probably by the time this card was issued, he had been sold to the Orioles' organization and he was soon out of the game.

Following his baseball days Zauchin was a pro bowler for awhile and managed a bowling center in Birmingham which had become his home during his minor league days. He died in 1999. His SABR bio is, as always, a good place to find his full story. He is a member of the Birmingham Barons Hall of Fame alongside the likes of Willie Mays, Rollie Fingers, Reggie Jackson and Pie Traynor.

His card shows him in his Senators home duds in Griffith Stadium.
Posted by Commishbob at 6:00 AM