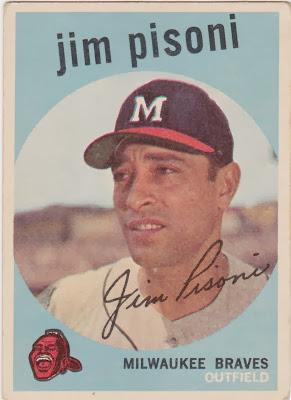 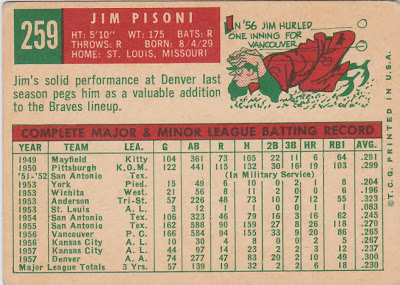 Hometown boy Jim Pisoni made his big league debut with the St. Louis Browns by appearing in the final three games in the franchise's history as they prepped to move to Baltimore. He'd been in the Brownie's chain since he signed as an outfield prospect in 1949 sandwiching three fairly successful minor league seasons around a two year military stint.

He went 1 for 12 in those three '53 games (his one hit was the next-to-last homer in Browns' history) and found himself back in the minors from 1954 through mid-September of 1956 when the Orioles included him in a trade to the Kansas City Athletics. He got into 10 games with the A's and hit a pair of homers as he flashed the power that had marked his minor league days.

The following season Pisoni was a semi-regular in the Kansas City outfield before he was part of a (surprise!) trade package that sent him to the Yankees. After a season and a half as Yankee property (but never playing for the big club) he was drafted by the Braves for 1959 but after a handful of games in Milwaukee he was returned to the Yankees. This archived article on Google concerns the Braves hopes when they took him in the Rule 5 draft.

He got into nearly 40 games over the next two years for the Yanks but spent the bulk of his time in the minors. He played for the reds' AAA club in 1961 and then retired to become an electrical contractor. He passed away in 2007.

Two points of interest... the shot on his card was taken in Yankee Stadium and the "M' is airbrushed over his Athletics' logo and the card-back leaves off his 1958 minor league stat line despite the write-up mentioning his "solid performance".
Posted by Commishbob at 6:30 AM