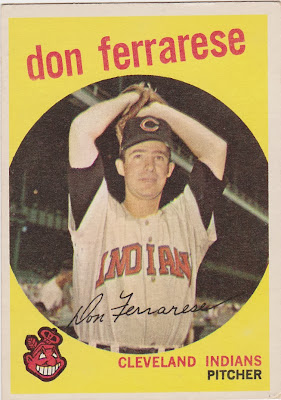 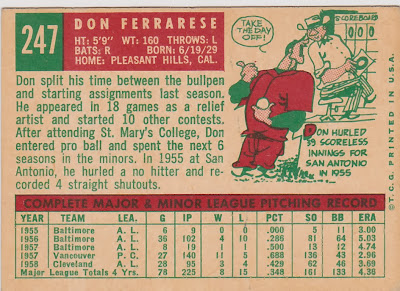 Don Ferrarese won only 19 games for five different teams over the course of eight seasons. Those numbers don't knock you over but he certainly shouldn't be dismissed that easily. You see it's what Don Ferrarese has done with his life after baseball that makes him stand out. But back to the game...

... Ferrarese signed on with the Phils in 1948. He wound his way through independent ball in the PCL and was dealt to the White Sox and spent time in the service. He was traded to the Orioles and debuted briefly in 1955. He made the O's staff in '56 and then spent 1957 shuttled between the O's and AAA ball. His baseball journey took many twists and turns as he was traded several times and through 1962 he was rostered by the White Sox (again), the Phils (again) the Indians, Cards and finally the Colt 45s for whom he never played.

Through it all he appeared in 183 games including 50 starts. He had a record of 19-36 with 12 complete games, two shutouts and 5 saves. His best game came with the Orioles on May 12 of 1956 when he entered the ninth having held the Yankees hitless. He lost the no-no but won a 1-0 game on a two hitter.

He once tossed four straight shutouts with San Antonio in the Texas League and had a three double day as a hitter for the Indians in May, 1959.

When he retired he went to work running his parents deli business and then he went into the real estate business. He was very successful and established a charitable foundation that benefits, among other things, needy students in his area of California. He has raised and donated millions of dollars. His foundations' website can be seen here. A few interviews with Ferrarese are here and here. More about his foundation is found here and here.

Sometimes what you find when you look into what appears to be just another '59 card can be amazing.