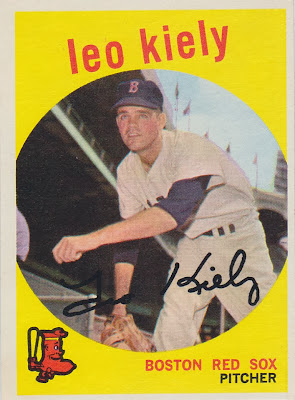 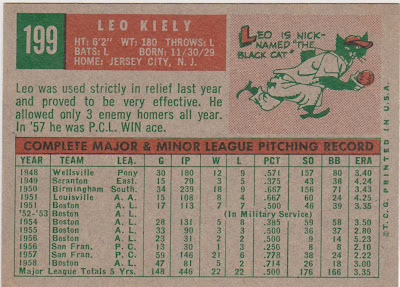 Jersey Boy Leo Kiely had a 26-27 career mark with 29 saves over seven big league seasons, mostly in Boston. But those rather pedestrian numbers belie some interesting aspects of his baseball days. For example Kiely was the very first player with major league experience to play in the Japanese major leagues.

According to his interesting SABR bio he pitched in Japan on days off from his duties as an active serviceman in the employ of Uncle Sam. And his 100,000 yen salary was just slightly less than that of the Emperor.

Kiely was in the service despite the after effects of a near fatal accident he suffered as a 5-year-old when he was run over by a truck and fractured both knees among other serious injuries. As a result he had one shorter leg for which he wore special shoes and subsequently was classified as 3-C by his draft board and placed into military service in a non-combat role. SABR goes into detain about Kiely's rough-and-tumble early life.

Kiely's career began when he was drafted by Boston in 1948. He was playing ball in a CYO league as he had never attended high school. Hard to conceive of that happening today. He had impressive minor league numbers and debuted in Boston in mid-1951. He went 7-7 in 19 games, mostly starts. He went into the service after that and that's when he pitched Army ball as well as in the Japanese League.

Returning to the Sox he was given a spot starter's role in 1954 and he went 5-8. He pitched out of the Red Sox' bullpen for another year and a half before he went back to AAA through 1957, He won a PCL high 21 games that year.

That earned him a return to the bigs and he had two seasons in the Sox' bullpen and finished his career with the A's in 1960 following a pair of trades that sent him to the Indians and then Kansas City in the off season. He pitched well for the A's but a sore shoulder ended his season and eventually his career.

Returning to New Jersey Kiely worked several jobs and died from throat cancer in 1984 at the age of 54.