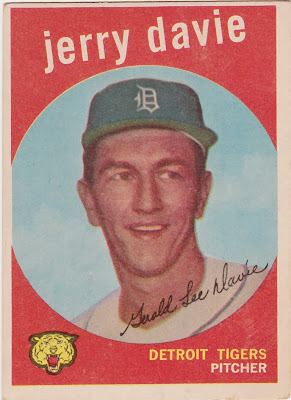 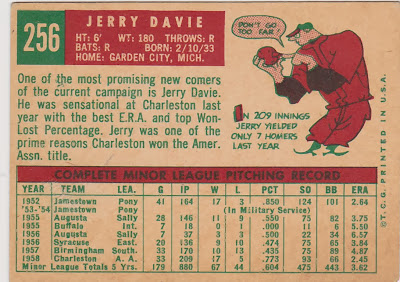 I have two projects cooking in the back of my mind that concern this set. #1) I want to catalog the stadiums that are featured in the photos and 2) I'd like to count up the number of guys in the set that spent one year in the minors followed by two years in the service. There seem to be a ton of those. I suppose it fits the pattern created by the average age of major league ballplayers in 1959 putting them in prime draft age during the Korean Conflict.

But anyway, here is another, Jerry Davie who was signed by the hometown Tigers in 1952. He had an impressive first season in the low minors and then put in his military time. When he returned to baseball he had mixed results in the Tigers' chain, usually hovering around the .500 mark.

That changed in 1958 when he went 17-5 with a sterling ERA in AAA ball and earned a spot on the Tigers' staff for 1959. Davie pitched in eleven games getting five starts before being sent back to the minors in June. He had one good start in late May at home against Cleveland when he pitched a four hit complete game. He was shelled in his next two outings and was gone for good after just a few minor league games in 1960. But even with that short major league career Jerry Davie had one thing he could boast about, a .400 lifetime batting average. In those 11 games he had ten at bats and a couple of RBIs. In fact in that May 31 complete game win he had two hits, drove in a pair and scored on Harvey Kuenn's walk-off homer in the bottom of the ninth. How cool is that?

He was director of parks and recreation in Garden City, Michigan after he retired and also worked in sales. I found an interesting piece in the Victoria (Texas) Advocate newspaper that profiles Davie as he debuted with the club in 1960. It touts the help he was to bring to the local club but as it turned out he only pitched in four games. You'll note the major league story next to the Davie piece that mentions a Brooks Robinson homer in an Oriole win. Way to go, Brooksie!!

Even nicer is an interview Davie did for a book about winter ball in Latin America.
Posted by Commishbob at 6:00 AM