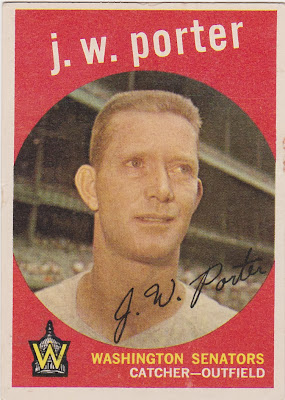 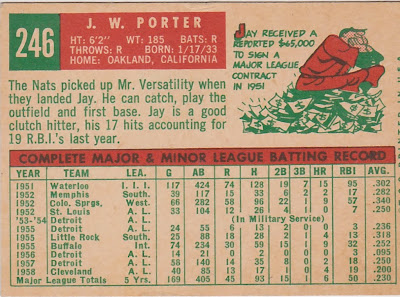 J. W. Porter was signed by well known scout Bobby Mattick out of Oakland, California in 1950. One of his high school teammates was Frank Robinson. He was called the best schoolboy prospect in the country. This comes from the 1951 Sporting News Baseball Guide:


Another record was set by J.W. Porter, Oakland catcher, when he captured the national batting championship for the second successive year. The 17-year-old receiver, who hit .551 in ten tourney games the previous year, produced a .488 average in 1950 national tourney play to retain the Hillerich & Bradsby trophy which is awarded annually to the leading batter … Porter, who received a bonus in excess of $50,000 for signing with the Chicago White Sox organization in December, 1950, was named the No. 1 American Legion Junior player of the year.

Starting in the White Sox system Porter hit well in his first season and a half in the minors before the Sox included him in a trade to the St. Louis Brown in July of '52. He played with the Browns for the rest of that season not as a catcher but as a centerfielder. He was traded to Detroit and then spent two years in Military Service before he was ever able to play for the Tigers.

Porter played for part of the 1955 season for Detroit and then was used very sparingly in 1956 getting only 14 trips to the plate despite being on the roster all season. There was a new Tiger manager in '57 and Porter got more work but he still wasn't a starter.

Traded to the Indians in 1958 he stayed one season before being traded to the Senators and from there to the Cardinals in 1959. He caused a minor stir in Cleveland by using a first baseman's mitt to catch Hoyt Wilhelm. He never returned to the majors but spent seven years in the high minors for several organization as a C/OF. For his career Porter hit .228 with 8 home runs.

Following his active career he managed for several seasons in the Montreal Expos system. He was known as a character during his playing days and has upheld that reputation since. He does some writing for baseball blogs, a bit of which I found here. The video below (which may or may not work for you) shows him introducing Jim Kaat at a function at the Elliot Museum in Florida which had a fairly extensive baseball exhibit. In the video Porter claims to have caught 14 Hall of Fame pitchers.

Tom Owens' Baseball by the Letters blog has featured Porter and adds some career anecdotes.