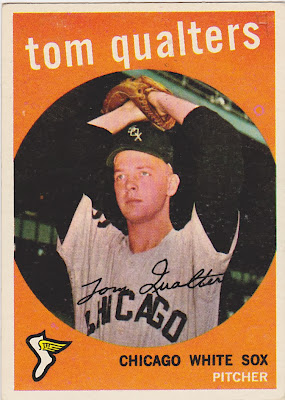 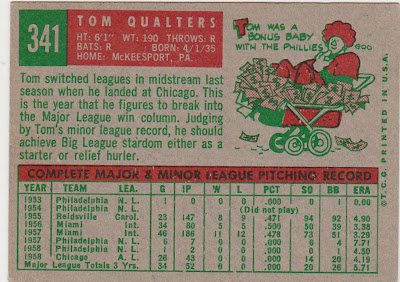 Tom Qualters had one of the best nicknames I've come across among the '59 set subjects. His Phillies teammates in 1953/54 called him 'Money Bags'. That came from the fact that Qualters, signed to a $40,000 'Bonus Baby' contract as a high school phenom, was a member of the Phils roster for both of those seasons and pitched a total of one third of an inning. Left him plenty of time to count his cash I suppose.

That old rule required players signed for more than $4,000 to remain in the majors on the signing club's roster for two years or risk losing them to waivers. Qualters was signed out of McKeesport, Pa. and made his debut on September 13 of that '53 season in a blowout loss to the Cardinals. He got an out but allowed six earned runs on 5 hits including a homer, a walk, a wild pitch and to ice the cake, he hit a guy. His ERA for the day/season was 162.00 which is not reflected on his '59 Topps card's stat line.

He was sent to the minors in 1955 and remained there for most of the next three seasons putting up pretty respectable numbers. He was recalled to the Phils in September of 1957 and was treated roughly in seven outings. After one game as a Phil in '58 he was sold to the White Sox. He pitched decently the rest of the way in the A.L. pitching in 26 games but was back in the minors in 1959 and he kicked around several organizations' system before retiring after 1962. His major league totals read 0 wins, 0 losses, 5.64 earned run average.

After baseball Qualters worked as an enforcement officer for the Pennsylvania Fishing and Game Department. His grandson Shawn Stiffler is head baseball coach at VCU. Another grandson, Ian Stiffler was drafted this season by the Braves and pitched in the Gulf Coast rookie league.

According to both Baseball Reference and Wikipedia Tom Qualters, shown on this card in Yankee Stadium, holds the distinction of being the only pitcher to appear on a Topps baseball card four times without ever recording a decision!
Posted by Commishbob at 5:30 AM