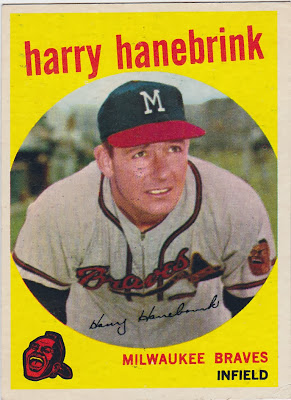 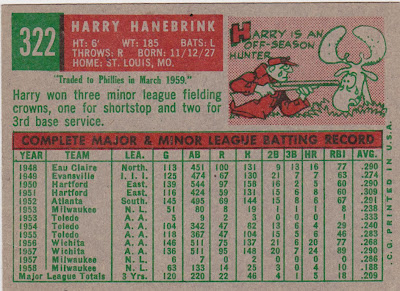 Harry Hanebrink played for a couple of NL teams as a utilityman in the 50s (he was a member of the Phils by the time this card was put in packs) and had less that 350 plate appearances but in checking him out I found two very different but equally interesting entries.

1) As detailed in this blog post Hanebrink, on August 6 of 1953, hit a bases loaded walk-off triple to propel the Braves to a 3-2 win over the Brooklyn Dodgers. That particular type of hit, a walk-off triple, didn't occur again in Braves' history for 60 years until Andrelton Simmons did it this past season against Colorado.

2) In 1951 Hanebrink and five of his siblings were sued by two other of their siblings over the settlement of their late mother's estate. I have no intention of reading through that entire brief but it seems that a couple of the kids were not happy that the will was changed and contested it on the grounds of their mother's mental state. The Missouri State Supreme Court appears to have come down on the side of the plaintiffs.

You just never know what will pop up in a Google search if you drill down far enough. Like this Toledo Blade newspaper feature on Hanebrink from 1955. It's worth checking out merely for the alliteration used in the headline.

As for Hanebrink, he was a longtime Braves minor league player having signed in 1948. Interestingly he was just 18 at the time but was already a Navy vet. He got that 51 game stretch in 1953 with the big club but didn't return until 1957 when he played in a handful of games and then he stuck with the team in 1958. He hit .270 as a part-timer that year and appeared in the World Series getting two pinch hit at bats.

In '59 he was traded to the Phils and got in 100 at bats in addition to some minor league work. The next year he was back in the minors where he finished his career in 1961.

My version of this card is the more common one which contains the 'traded' line. Here is a shot of the 'no traded line' version. 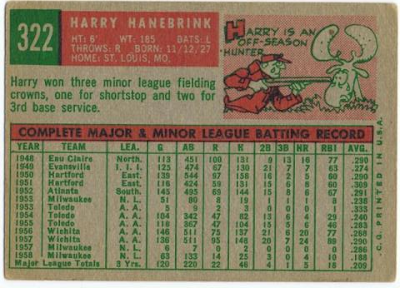