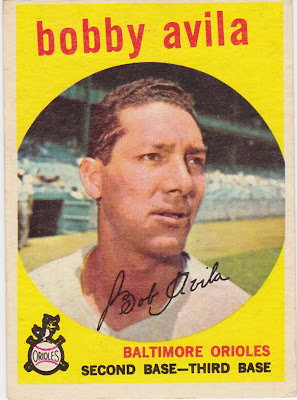 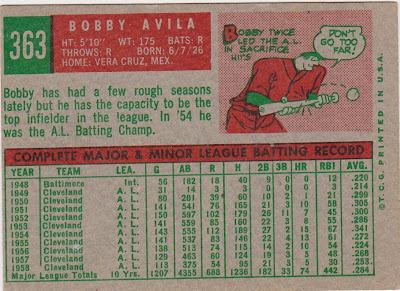 Bobby Avila may not be the most obscure batting champ since WWII (I'd go with Bill Mueller who I've never heard of till now) but he's among them. And that's too bad because Avila had a pretty solid career in the 50s. Growing up in Mexico his well-to-do family wanted him to be a lawyer like his father but the teenage 'Beto' Avila played soccer and well as baseball.

He signed to play in the Mexican leagues and began there at age 19 in 1943. His play caught the attention of big league scouts but Avila turned down several offers before finally signing with the Cleveland Indians in 1948. He spent that season with the Indians' top farm club in Baltimore and then sat on the Indians bench for a good bit of 1949 as a bonus baby. In 1950 he got over 200 at bats and hit .299 as he moved into the Indians lineup at second base.

Beginning in 1951 he held down the teams' keystone spot for eight seasons. He made three AL All Star squads during that time, three times hit .300 or better and twice finished in the top ten in MVP voting. He was a good fielder and bunter and led or tied for the league lead in sacrifice hits twice. His best season was 1954 which not so coincidentally was the year the Indians went to the World Series. Avila won the batting crown that season with a .341 average despite playing for about half the year with a thumb broken in a baseline collision with Hank Bauer. He had career highs in homers and RBIs that year as well. According to unofficial numbers 13 of his 15 homers either tied the game for the Indians or gave them a win.

By 1958, as an 34 year old, his playing time and skills were slipping and he was traded to the Orioles for the '59 season. He played 20 games for the Birds before being waived and picked up by the Red Sox in May. In July he was waived again and this time he was claimed by the Braves where he finished out the year. He was active in the Mexican League in 1960, had a very good and probably very satisfying final season, and then retired.

Following his playing days Avila bought into a Mexican League club and went on to become the league president. He later got into politics and was elected mayor of his native Vera Cruz. He is a member of both the Mexican and Latin American Halls of Fame.