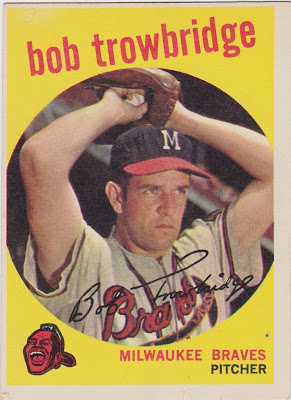 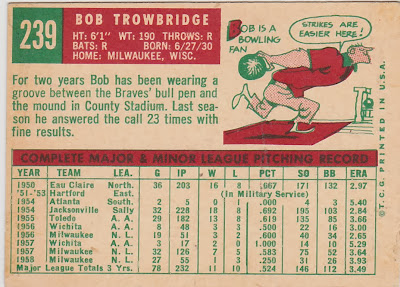 After signing with the Boston Braves in 1950 Hudson, New York native Bob Trowbridge pitched very well for a season in the low minors and then spent three full years in the military. While serving Uncle Sam Trowbridge honed his pitching skills and won 60 games while losing only six for the Nellis Air Force Base team located near Las Vegas.

He returned to the pro ranks in 1954 and was a standout in the minors. He earned a trip to the majors for a good chunk of the 1956 season and went 3-2 in 19 games for the Braves. He sported a 2.66 ERA but his numbers indicate a tendency to walk guys.

In 1957 he started well at the AAA level and again was brought up. He made 16 starts in 32 appearances and had success. He tossed a pair of gems in September of that year including his only career shutout and a five hit one run effort late in the month.

He appeared in Game Three of the World Series against the Yankees that year, He pitched the seventh inning and had a pretty rough go of it as he allowed two hits and walked three and saw each of those runners score. Tony Kubek's homer was the big blow. Trowbridge did get Mickey Mantle to fly out to end the inning. I'd give up ten years of my life to say I faced Mickey Mantle in a World Series game. It might have been a rocky outing but he got a ring that season.

He was almost exclusively a reliever for the next two seasons and didn't have the success he'd had previously. Trowbridge found himself traded to Kansas City for 1960 where he had modest numbers and pitched some in the minors. He was back in the minors briefly in 1961 before he was done with the game.

He went on to work for the Department of Corrections near his upstate New York home until he passed away at the age of only 49 in 1980.

I wouldn't swear to it but that might be Connie Mack Stadium behind Trowbridge. I think I see just enough red to make that possible. There have been enough Phillies cards showing that park for me to know that the Topps photographers did make it that far across the Hudson (and Delaware) Rivers.

Or it could be the Polo Grounds.
Posted by Commishbob at 6:00 AM