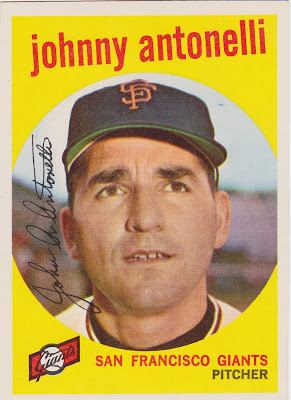 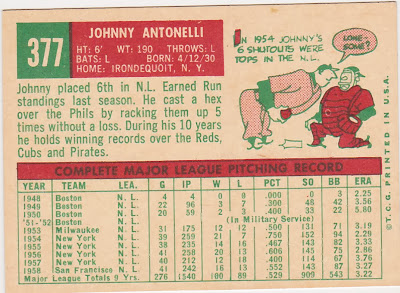 Johnny Antonelli was signed by the Milwaukee Braves as a 'Bonus baby' in 1948 after he wowed scouts with a no hitter in a Rochester, N.Y. semi-pro all star game before 8000 people. As such the Braves had to keep him on the major league roster through 1950. He was used sparingly and then spent two years in the service. Antonelli claims the military was where he learned to pitch. He is one of a handful of players who never played a day in the minors.
That's apparently true as when he returned in 1953 he went 12-12 with a 3.18 ERA for the Braves. The Braves gave up on him and traded the lefty to the Giants in a deal that paid huge dividends on Coogan's Bluff.
Antonelli turned into the Giants' ace and he went 21-7 with a league leading ERA as the club went to the World Series. In that Series Antonelli earned his ring as he pitched and won Game Two and returned in Game Four with a save out of the bullpen in the Series finale.
For the next five seasons, through the Giants' move to San Francisco, Antonelli pitched about as well as anyone in the league. He had made five NL All Star squads when, in 1960, everything went south. He pitched poorly, squabbled with management and the press, complained about Candlestick Park, was boo'd at home and lost his starting spot.
In 1961 he found himself in Cleveland and then Milwaukee (ironically both teams that had played key parts in his career). He was out of the game after that season. But Antonelli had invested his baseball salaries wisely and made millions with Firestone franchise stores.
Antonelli wrote his memoirs recently and the book was released last year. It has some nice reviews on Amazon. SABR has an informative bio, of course.