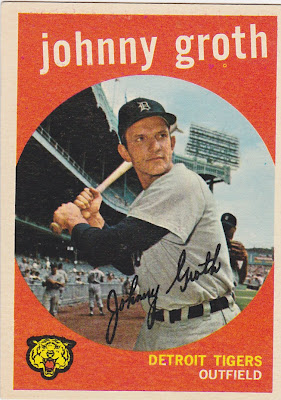 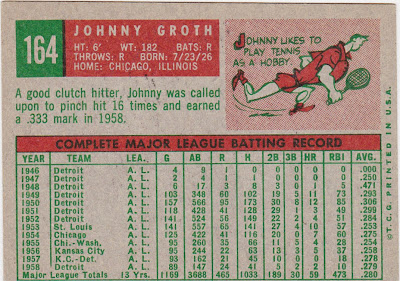 A three sport standout at the famed Chicago Latin School, Johnny Groth joined the Navy when he graduated. Playing alongside such notables as Bob Feller Groth's reputation spread beyond the military ball-fields and he was signed by the Tigers in 1946.
After a brief look late that year Groth spend most of the next two season's in the minors before being named a starting outfielder in 1949. Labeled as the 'next Joe DiMaggio' it would have been near impossible for Groth to live up to that hype. He hit .293 in his rookie year and continued to hit well if not spectacularly for the Tigers before being traded to the Browns for 1953. After a year in St. Louis the Browns (actually they were becoming the Orioles) traded him to the White Sox and he went on to play for the Senators, A's and then the Tigers again. he had a nice career but obviously never did become the star he was projected to be.
He managed in the minors after his playing days ended in 1960. On his card he poses in front of the visitors' dugout at Yankee Stadium. Assuming the shot was taken in 1958 it appears to be Herb Moford warming up, maybe for a start. That would put the day at August 24th as it was Moford's only start that season in New York.
Groth has an interesting backstory and as always his SABR page is recommended reading.
Posted below is his 1954 Bowman with him airbrushed into the Orioles uni that he never really wore. 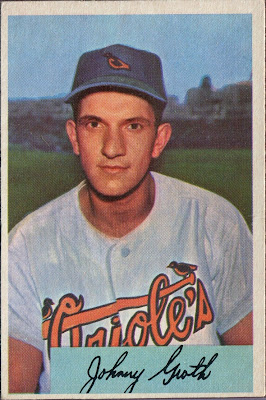