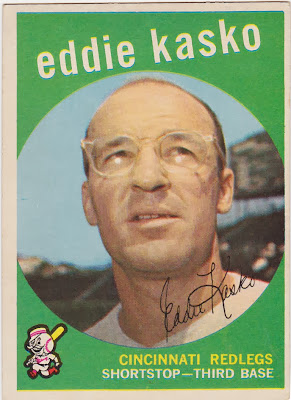 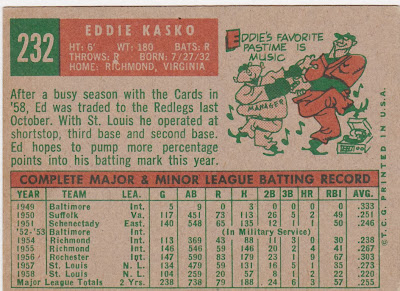 Jersey Boy Eddie Kasko enjoyed a three part career in the majors. Signed by the Browns in 1949 he spent tow years in the service and was traded twice before he debuted with the St. Louis Cardinals in 1957. He stepped into a starting role that year and spent time at short, third and second as he did most each season of his career.

He hit a respectable.273 his rookie year but when his average slipped by 50 some points in '58 he was traded to the Reds. He played four solid seasons in Cincy, hit well, fielded well and made the 1961 All Star squad. He hit .311 in the 1961 World Series against that Yankees.

He was dealt to Houston for the 1964 season as they looked to solidify their defense and played for the Colt .45s/Astros through '65. His last year as an active player was in 1966 with the Red Sox.

After his playing was over he went on to manage in the the Red Sox chain for several years before he succeeded Dick Williams as Boston's manager in 1970. His clubs finished third twice and then second twice but never could break through for a pennant.

Kasko remained with the Red Sox as a scout and  as the team's director of scouting and vice president, baseball development. He retired in 1994 and was elected to the Boston Red Sox Hall of Fame in 2010.

I believe the Kasko is the first player to appear in this set who has an active Facebook page and Twitter account. Make of that what you will.