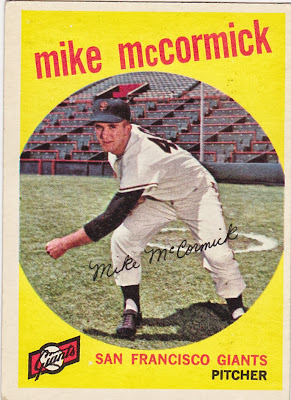 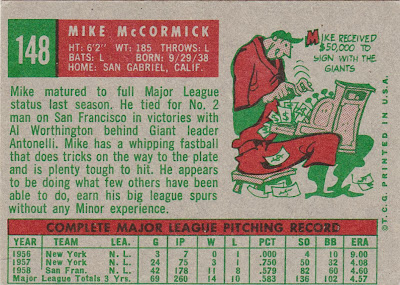 As alluded to in the card's cartoon, Mike McCormick was one of the 'bonus baby' signees back when he was penned to a big contract by the New York Giants in 1956. McCormick was fresh out of high school and only 17 years old when he joined the club for his mandated two year roster stay. In those two years he had a total of 27 appearances including 7 starts. In '56 he didn't get into a game until September 3rd.

He took a spot in the Giants' rotation beginning in 1958 and had double digit wins for four straight seasons. He led the NL in ERA in 1960 and was a member of the NL All Star teams in 1960 and 1961. He developed shoulder problems the next season and was traded to the Orioles for whom he pitched for two seasons.

Traded again, this time to the Senators proved a tonic for McCormick and his numbers improved. In December of 1966 the Nats traded him back to the Giants for Cap Peterson and Bob Priddy. Turned out to be a steal for San Francisco. McCormick had the best season of his career in 1967 winning 22 games, posting a 2.85 ERA and winning the Cy Young.

I found two interesting facts about McCormick's '67 season. He was the first Cy Young winner for the Giants' franchise and the only one prior to Tim Lincecum. Hard to believe that Juan Marichal never took home that hardware. Burden of pitching in the pitching-rich 1960s I guess. And McCormick was one of 17 pitchers to win the award without having made their league's All Star team in that season. This article lists those pitchers. It's from 2010 but I have checked the subsequent seasons.

McCormick had a couple of solid seasons following his 1967 zenith and then his numbers fell off. He finished his career with short stints with the Yanks and Royals before pitching in the minors to close out his active career.

Two final tidbits:
On July 14, 1968 McCormick gave up Hank Aaron's 500th homer.
On June 12, 1959 he threw a rain-shortened "no-hitter" versus the Phillies. He allowed a hit in the 6th, which was eliminated from the official records as rain cancelled the game and the official game became a five inning affair.

The red railings in the stands behind McCormick on this card signify Seals Stadium.