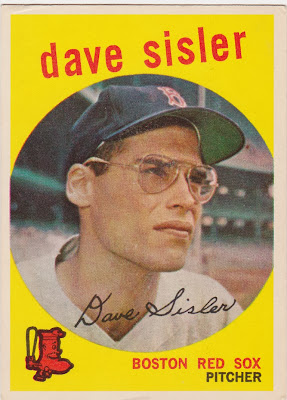 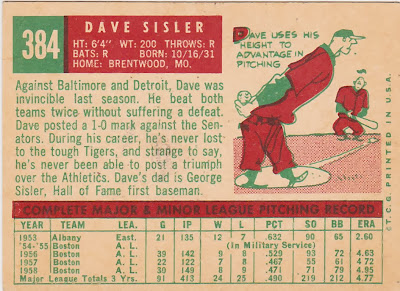 Son of Hall of Famer George Sisler, righty pitcher Dave Sisler attended Princeton University and was signed by the Red Sox in 1953. He spent a productive year with the Sox' Class A club and then spent two years in the military before returning to a big league career.

Sisler's three seasons with Boston are remarkable in their consistency. He was within one game of .500 each season and had an ERA in the high 4's each season. The only variation comes from the fact that he was evolving from a spot starter/reliever into a regular rotation option. A trade to the Tigers in May of 1959 put an end to Sisler's days as a starter and he finished out his career in the bullpen for Detroit, the expansion 1961 Senators (he had eleven saves) and the Reds in 1962.

In addition to his father, Dave Sisler had two other family members involved in the game. His brother Dick Sisler spent eight seasons as a 1B/OF in the NL from 1946 through 1953 (he was an All Star in 1950) and brother George Sisler Jr. was a minor league player who went on to become president of the International League and the very successful GM of the Columbus Clippers.

Dave went on to receive a postgraduate education at Washington U of St. Louis and became vice chairman of A.G. Edwards (now Wells Fargo). And come to think of it he looks more like a finance executive than a ball player. He died in 2011.

The write-up on the back of this card is remarkable in it's lacklusterlessness*.