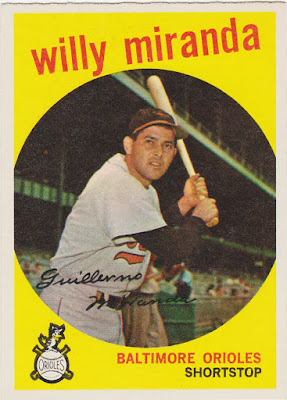 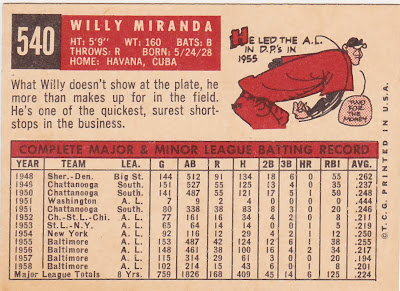 Before the 'Mendoza Line' there might well have been the 'Miranda Line'. Willy Miranda was the prototypical 'good field/no hit' 50s shortstop. In 9 seasons he hit .221 with six homers. That's really not terrible but there are a couple of great quotes that show how Miranda's hitting prowess was viewed.

These are from his Baltimore Sun obit:

A newspaper columnist wrote that Mr. Miranda was the only "Major Leaguer to hit three ways -- righty, lefty and seldom."Manager Richards fumed that Mr. Miranda couldn't hit a ball with any consistency until one afternoon in Cleveland, when he got three straight hits. When he was replaced by a pinch hitter, Mr. Miranda inquired as to why."You already have three hits and it defies logic to think you're going to get four," said Mr. Richards.

But there are also quotes, found in that same obit, that give a glimpse of how Miranda's glove was viewed:

He was called "Ringling Brothers" by Orioles' Manager Paul Richards, who said he had "the hands of a pickpocket."Gus Triandos, a catcher during those years, described Mr. Miranda as "flashy a phenomenon" whose arm was almost "abnormal for such a small guy.""Had he been able to hit, he would have been a greater player than he was," Mr. Triandos said yesterday from his home in San Jose, Calif."He was a wizard with a glove -- and you need a strong glove like his when you play the most demanding position on the field," said Orioles Manager Davey Johnson, who said Mr. Miranda's death was a "personal tough loss.""He was the best defensive shortstop I've ever seen and I've seen plenty," said recently retired Los Angeles Dodgers Manager Tommy Lasorda, who played ball with him in Cuba. "This guy could do it all."

In 1948 Miranda was signed out his native Cuba by the Washington Senators.  He later defected to the U.S. by hiding in the cockpit of a Pan Am airliner with the help of the crew. He helped Cuban nationals leave as part of the Mariel 'boatlift' in 1980. He received honors from the city of Baltimore in the mid 70s for rescuing a man from a burning house. Seems like he could do everything...except hit.

In his career he played for the Senators, White Sox, Browns/Orioles and Yankees. His two years as a regular came with the Orioles in 1955/56. He played two more seasons as a platoon player in Charm City. During the 12 months from October 1951 through October 1952 he was involved in four separate transactions that saw him bounce from the nats to the White Sox to the Browns and back again a few times. He ended his career with a couple of minor league seasons. He later managed in the Mexican League.

As is usually the case SABR is the go-to site for details on this most interesting player.

When I pulled this card for scanning I noticed that the Orioles logo appeared 'different'. 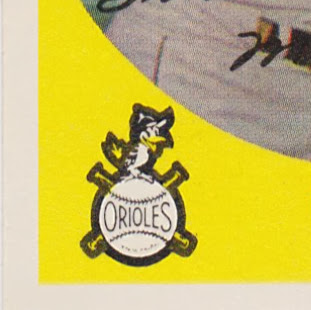 Here is the logo from Gene Woodling's card. The red stitches are black on Miranda's card and the Bird's face is only partially colored. it appears this was consistent over all the '59 Miranda cards I've seen. 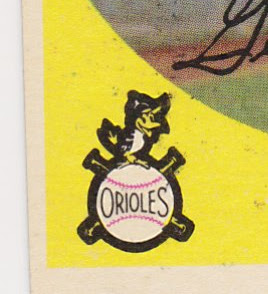