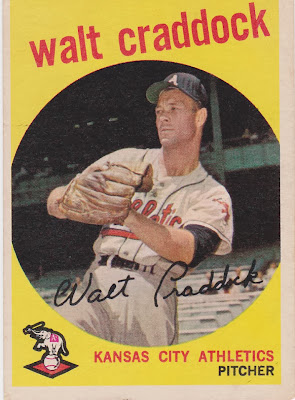 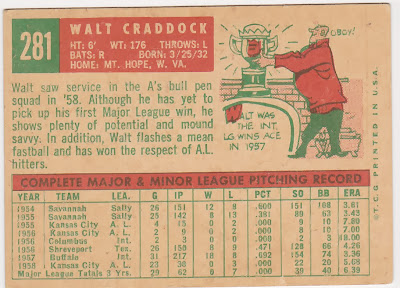 West Virginia native Walt Craddock signed with the Philadelphia A's in 1954 out of Syracuse University. The lefty pitched in the Athletics' farm system for the better part of two years with better numbers than his results indicated.

That got him a taste of the bigs late in 1955... and got lit up. He repeated that in 1956, his late season cup of coffee resulted in him getting lit up. He had a great season in AAA in 1957, leading the International League with 18 wins and then spent the whole 1958 season in Kansas City, for the most part getting lit up.

That was his last season in the big leagues. By the time this card was issued he'd been dealt off to Reds. He spent two seasons in the Reds system, pitched very well, but then retiring. He finished with an 0-7 big league mark.

But he did get to be photographed in Yankee Stadium and had this one Topps card.
Posted by Commishbob at 7:00 AM