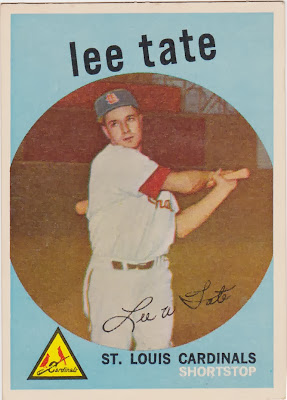 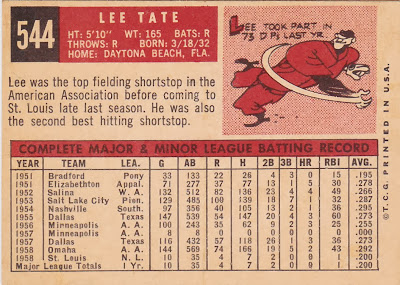 This is infielder Lee Tate's one and only baseball card, at least among major company issues. It's a Topps 'high number' which I haven't posted a lot of lately. Of course it's easy to spot given the red and black printing on cream colored stock that Topps used as they transitioned to football card production in 1959.

Beginning with a stint with independant clubs in 1951, Tate was a long time minor leaguer. He played 15 seasons riding the buses from Utah to Richmond and everywhere in between. After seven seasons in the minors during which he hit fairly well for a middle infielder the Cardinals gave him a couple of tastes of the majors. He got into 51 games with nearly a hundred plate appearances in 1958 and 1959. But he failed to catch on and spent nearly all of the rest of his career in AAA. He played his last games in Austin in the Texas League in 1965.

He hit .273 in 1660 minor league games and spent many of his winters toiling in the Cuban Leagues. No telling how many at bats he actually had outside of the bigs.