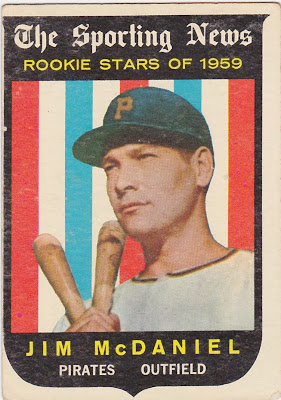 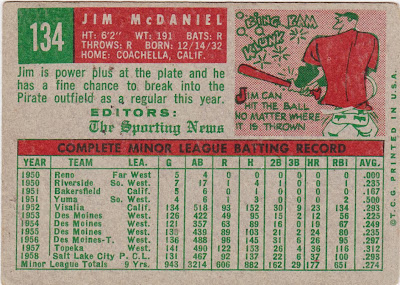 Because he never played in the majors I had trouble finding info on Jim McDaniel until I found him listed as 'Jimmie' on the Baseball Reference 'Bullpen' site. Oddly he's not linked there from his BR minor league page. But be that as it may, McDaniel was a big swinging outfielder for numerous organizations during the 1950s and early '60s. Hit about 120 homers in the four seasons prior to this card being issued and that's likely what prompted Topps to include him in the Rookie Star subset as a 26 year old.
Topps states on the back of the card that McDaniel 'has a fine chance to break into the Pirates outfielder as a regular [in 1959]. With Bob Skinner, Bill Virdon and Roberto Clemente already holding down spots I'm not sure where he would have fit in.
McDaniel played for 12 different clubs over 14 minor league seasons. He broke into professional ball with the Reno Silver Sox and soon thereafter the Class C Riverside Rubes. Really. He did a bit of pitching along the way which I suspect wasn't unusual in those days, particularly when it came to independent minor league teams.
This is his only Topps card.
:::update:::
I kept digging for stuff on Jimmie McDaniel and found a tidbit on the SABR page which is basically an excerpt from the 1952 California League press guide:

James (Jimmie) Ray McDaniel is single and lives in Coachella, California per the 1952 California League Gold Book (Fourth Edition). He graduated from Coachella Valley High School in 1950 and was a member of the baseball, basketball, football, swimming and track teams. He is a surveyor during the off-season. His hobby is cars. His previous professional experience has been as a pitcher primarily.Information is from the 1952 California League Gold Book (Fourth Edition)