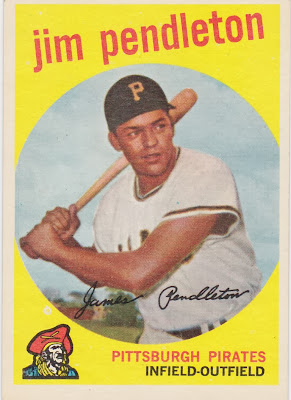 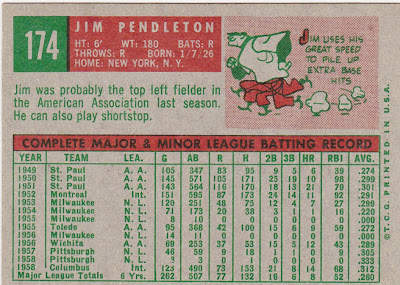 Jim Pendleton is cooler than you thought. Really, he is. Want proof?

1) He played every position on the field except pitcher and catcher in the majors.
2) He was the last WWII vet to play in the bigs when he played left field for the fledgling Houston Colt 45s on Opening Day, 1962.
3) He was a near-full time outfielder for the Braves in 1953 but got squeezed out by a hot rookie in 1954... Hank Aaron.
4) His nickname was 'Guv'nor'.
5) He was originally signed by the Brooklyn Dodgers and moved from the outfield to shortstop because of a logjam of OF talent, think Duke Snider.

Most of that and more comes from a wonderful tribute to Jim Pendleton written as an obit in 1996 by the terrific Houston writer and author, Mickey Herskowitz. It's a quick read and highly recommended. And it tells the tale of Jim Pendleton better than I can.