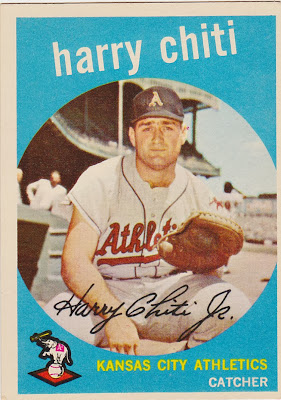 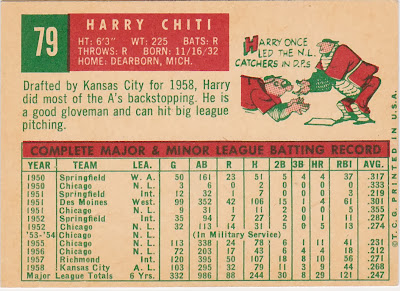 Harry Chiti debuted with the Chicago Cubs at the age of 17 in 1950 after being signed earlier that year. He bounced back and forth between the Cubs and the minors for three seasons before spending two years in the service during the Korean War.

He was the Cubs' starting catcher when he returned in 1955 but he played as a platoon catcher in '56. Then he was dealt to the Yanks and he spent the '57 year in the minors. Traded again, this time to the Athletics, Chiti played in over a hundred games for the A's in 1958 but his playing time decreased through the later part of the decade and he was traded three more times within the American League, to the Tigers, the Orioles (for whom he never played) and then the Indians.

It's a long told story that in 1962 the Indians traded Chiti to the New York Mets for a player to be named later. That player turned out to be Chiti himself and thus he was one of the few players ever traded for himself. The truth is that he was originally sold to the Mets and then returned to the Indians for cash. So it was not exactly being traded for himself but it's close enough to make a good story.

After a couple more seasons in the minors Chiti retired. He had a .238 career average. He led the NL is a couple of defensive categories during his career including CS percentage. His son Dom was a minor leaguer in the Braves and Orioles' chains and coached and scouted for the Texas Rangers.

As a bonus here is a really nice 1954 Bowman of Chiti. Note that he is described as a 'husky youngster' and that the write-up mentions that he would be in the service that season. Nice Polo Grounds background. 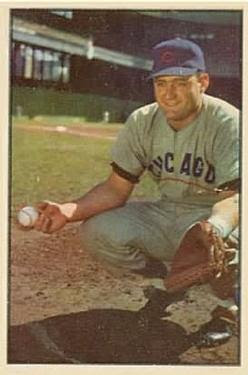 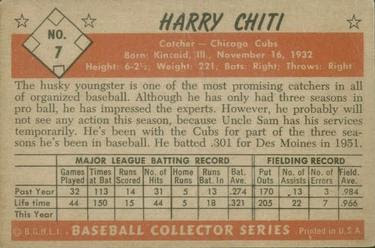