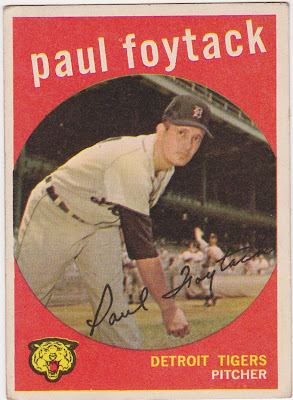 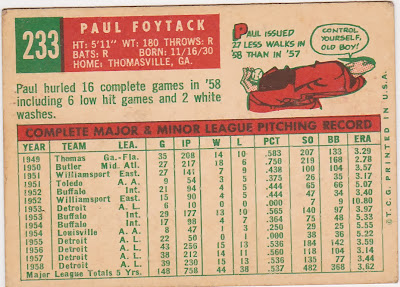 Righty pitcher Paul Foytack had a respectable career as he won in double digits six times in the 50s for the Tigers. (The fact that he also lost in double digits six times is irreverent to this discussion.) He signed with the Tigers in 1949 but wildness kept him out of the majors until he found his control and nabbed a spot on the 1956  Detroit staff.

He teamed with Frank Lary, Billy Hoeft, Jum Bunning and, at times Don Mossi,  to give the Tigers a better than average starting rotation. But the thing about Foytack is that his most memorable moments came not through his successes, but his propensity to give up homers. Consider:

Detroit, 9/10/60 - Mantle unloaded an incredible home run over the right-field roof  [of Tiger Stadium]. According to the Guinness Book of World Records, it's the longest home run ever measure after the fact.through a light tower (which it may have grazed) and out of the park. The pitcher was Paul Foytack. Years later researcher Paul Susman, Ph.D. found eyewitnesses who confirmed exactly where the ball landed on the fly. Dr. Susman then measured the distance, which turned out to be an astonishing 643 feet! This was almost certainly the longest home run Mickey hit in a regular season game that could actually be measured to the spot it landed, and probably the longest homer anyone ever hit in a regular season game that could be measured to the actual landing point. This 643-foot home run is listed in the Guinness Book of World Records as the longest homer ever "measured trigonometrically." 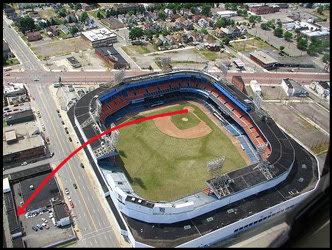 And I also found this on Mantle's site.


Detroit, 6/18/56 - The Mick walloped a tremendous homer over the right-field roof between the light standard and the end of the upper deck. The ball went completely out of the park and landed on the adjacent Trumbull Avenue. It was all the more impressive because it was hit into a stiff wind. Again, the pitcher was Paul Foytack. (This was the first out-of-the-park homer Mantle hit off Foytack.) This home run brought about Tigers' manager Bucky Harris' famous remark, "That would bring tears to the eyes of a rocking chair." Just two days later Mickey would hit two homers into the upper deck bleachers in centerfield at Briggs Stadium - something no player had ever done even once. Both of those home runs landed high above the 400 foot sign in the left-centerfield bleachers. In a 2007 story in the New York Times Foytack remarked on his career, allowing dingers, a memorable autograph he signed and his thoughts on Barry Bonds.
Posted by Commishbob at 7:00 AM