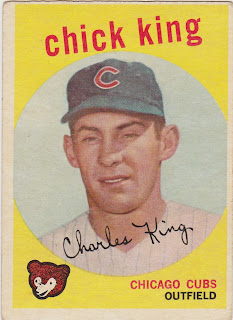 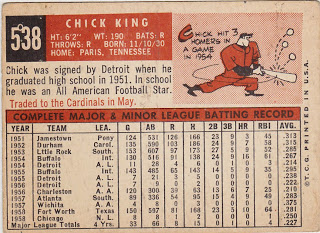 Sometimes I come away from doing research on a player in this set and I find myself wishing I had had the chance to know him. Charles Gilbert 'Chick' King is one of those players.

The pride of Paris, Tennessee the outfielder never had an extended stay in the majors. King never spent more than a short stint in the big leagues in any of the five seasons in which he saw action. 12 games and 31 at bats were his limits as he made his way through the Tigers, Cubs and Cardinals. He had 85 at bats total and only one extra base hit, but don't dismiss him based on that.

First, you need to read some of the lovingly written first person accounts by young men who learned their baseball and much more from Chick King when he coached in his hometown after his playing days. Then read a great pair of articles that include interviews with him and his wife and stories about his minor league experiences, his upbringing, life after pro baseball...oh, and his meeting Fidel Castro.

Chick King died in 2012. His obits fill in some details about his life and add to his legacy.

Some other things about King of note....he was a standout prep football player and was recruited by Georgia but ruled ineligible when it was found that Georgia and used 'illegal inducements' in the recruiting process. King ended up at Memphis..... King played 11 minor league seasons in at least that many different cities all over the map. He had a career .280 average in over 1400 games.

I haven't posted a high number card in a while. Topps had gone to the black ink for the text and stats by the time they were printing these, probably because they were cranking out their football set using black inked backs at about this time as well. King's card has the 'Traded to..' line on the back. It is not a variation as some of them with the 'Optioned to' line have been. 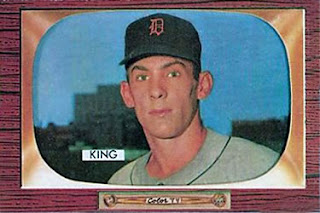