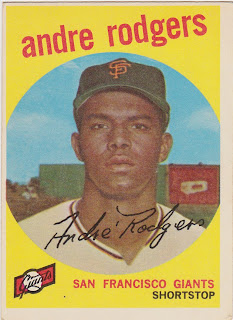 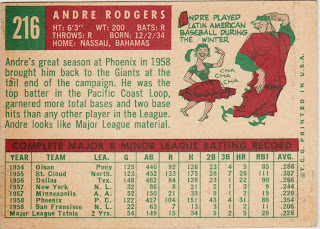 Andre Rodgers was the first Bahamian to play in the major leagues. The story goes that he was a talented cricket player and paid his way to a New York Giants' try out camp in 1954. Lacking polish and baseball experience Rodgers set about 'learning' the game as he played his way up the teams' chain. As a shortstop he had impressive minor league stats, especially for a guy who hadn't played any baseball prior to his signing. The Giants noticed and he debuted in 1957.

He got month+ 'looks' in '57 and '58 and made an impact in 1959 when he played in 71 games and hit 250 while sharing the shortstop job with Eddie Bressoud. After a 1960 season in which his progress seemed to stall he was traded to the Braves and then on to the Cubs on the eve of the 1961 season.

Another year of platooning gave way to a full time shortstop job with the Cubs in 1962 as he replaced Ernie Banks who was moved to first base. He had his best seasons in Chicago hitting .278 in '62 and 12 homers in 1964. He held that job for three seasons and was traded to Pittsburgh where his output and playing time dwindled. After spending 1968 back in AAA he played one partial season in Japan before retiring.

Rodgers, who passed away nine years ago in his hometown of Nassau, had two brothers who played minor league baseball. One was killed in a car wreck just as his career was starting.