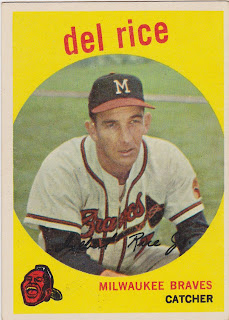 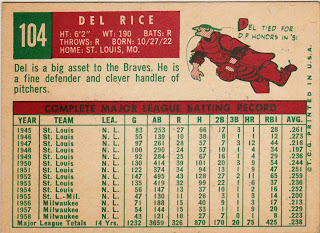 Whoa. Catcher Del Rice had his first professional at bat in 1941 with the Williamson Red Birds, a Cardinals farm club in Williamson, West Virginia. He had his last professional at bat with the El Paso Sun Kings, an Angels farm club in El Paso, Texas in 1970. That's right, 1970. For the math impaired that's a span of 29 seasons. In fact, Ol' Del had two hits in three trips in 1970. At the age of 47.

In between Del Rice played 17 major league seasons, mostly with the Cardinals and Braves. He debuted with the Cards in 1945 and after a couple of seasons as a reserve his career gained traction and he was the Cards' primary catcher from the late 40's through the 1953 season. He got a World Series ring with the Cards in 1946, a Series that saw him go three for six with a double in three games.

He was never a big hitter but he had some decent batting averages and smacked the occasional long ball. Where he excelled was as a defensive player and as a handler of pitchers. He made the NL All Star team in 1953, a year after leading the league's catchers in putouts and assists. Traded to the Braves in 1955 Rice backed up All Star Del Crandall and served as Bob Buhl's 'designated catcher'.

By the end of the decade he had picked up his second World Series ring with the 1957 Braves club and then in 1960 and '61 he saw action with the Cubs, Cards (again), Orioles and Angels before leaving the field and entering the coaching/managing ranks. It was as a minor league manager that Rice got those last few at bats. He managed the 1972 Angels to a fifth place finish in 1972, his only year as a big league skipper.

He later was a scout for the Giants and was serving in that job when he passed away in 1983 at the age of 60. Rice had been an outstanding two-sport athlete and played pro basketball for the old NBL's Rochester Royals for several years while also playing for the Cardinals. There is a youth baseball league named for him in his native Ohio.
Posted by Commishbob at 6:30 AM