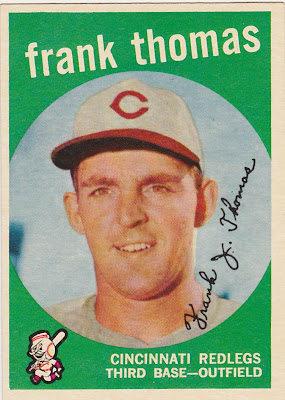 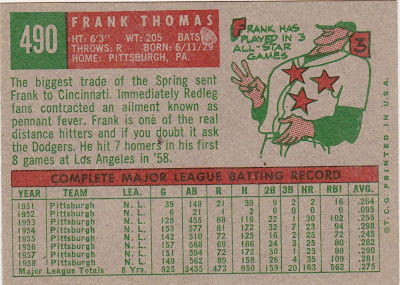 Frank Thomas has appeared here previously on a 'special' multi-player card. And I ragged on that card a lot. Time to give 'The Original One' his due.

Thomas was signed in 1947 by the Pirates. He got a taste of the big leagues in 1951 when he was called up in mid-August and played as a regular through the end of the year. Did do badly either. But he spent most of the '52 season in the minors before getting a starting job with the Bucs in their outfield in 1953. He hit 30 homers and drove in 102 runs and got some MVP votes but not a peep in the ROY balloting. I'm guessing he was ineligible because of his '51 experience. It should be noted that the '52 Pirates went 42-112 so that fact that Thomas wasn't up for much of that season was probably a blessing.

The Original Thomas had what could be called an 'interesting' career. First there is his nickname, 'The Big Donkey'. Yes, the miracle of Google has informed me that Adam Dunn also has that name so I suppose that Thomas could claim to be the 'The Original Big Donkey'. But anyway Thomas played on seven different national League clubs during his 16 year career. He must have kept a bag ready because his transaction log resembles MapQuest directions from Alaska to Tanzania.

Other high and low lights:

-He was traded by the Phillies to Houston in 1965 for starting a fight with teammate Dick Allen on the field. Now considering that Thomas supposedly earned his nickname because of his lousy people skills a fight with the charisma impaired Dick Allen was probably a hot wager in the Phillie clubhouse.

-He played on the Original (snort) New York Mets in 1962, another team considered among the worst of all time.

-Bill James's win shares (of which I am clueless), sez he was the worst fielding third baseman ever among those among the top 300 in innings played at third.

-As the first baseman for the Pirates e made the last putout at the Polo Grounds when it was the home of the New York Giants on September 29th of 1957.

He appeared on the cover of Sports Illustrated in July of 1958. If you open that issue there is a feature story on him with pics of his family. (Also an unrelated swimsuit pic of an attractive French model appears in the letters section. SI hasn't changed all that much I guess).

You know, for a guy who was supposedly not the most friendly, he has a lot of 'smiley' shots. 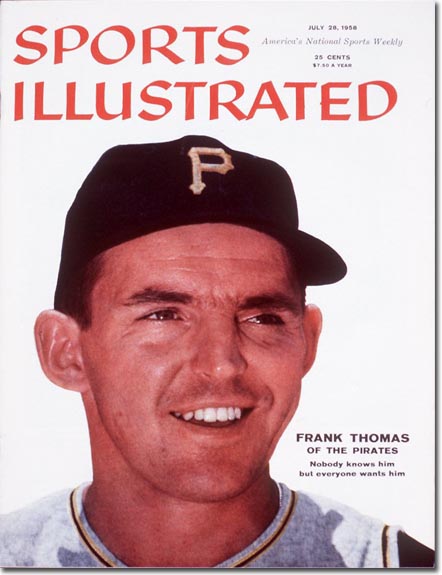