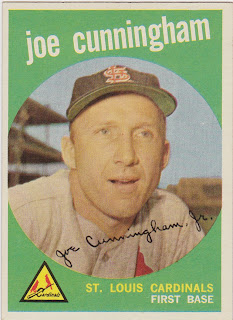 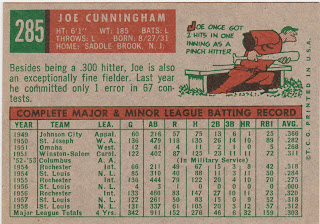 It's another 'Regular Joe', that's three in a row!

Joe Cunningham came from Lodi, New Jersey. That's my neck of the woods, just a few towns over from where I lived as a kid. The Cardinals signed Cunningham in 1949 as a firstbaseman and he worked his way up through the minors taking a couple of years to serve in the military.

He broke in with a bang in June of 1954 with a homer off Art Fowler in his first game. He backed that up with two homers off Hall of Famer Warren Spahn the very next day. He finished out that season with a .284 average and 11 homers to go with 50 RBI. But the next year the Cardinals moved Stan Musial to first and Cunningham found himself back in the minors for a couple of seasons.

He returned to the Cards in 1957 with a role that gave him near full time status as he filled in for Musial at first when he wasn't sharing the corner outfield spots with St. Louis regulars. He hit over .300 both seasons. Handed the right field job for 1959 Cunningham had his best season to date with a .345 average and tying for the league lead in OBP. He made his only All Star squad that year and got a pinch hit opportunity in the second of the two games.

Two more years with St. Louis preceded a trade to the White Sox for Minnie Minoso after the '61 season. He hit well for the Sox that year but a broken collarbone in '62 slowed his career. He finished up with a stint with the Senators before he retired.

After coaching and managing in the Cardinal system he took on a roll in the Cards' front office which he was still involved in. You can read a nice series of 'interviews' with Cunningham here. In it he discusses his current duties and reflects on his career in the game. Seems like a really great guy. He looks like one on his card as well. That's the Polo Grounds in the shot.