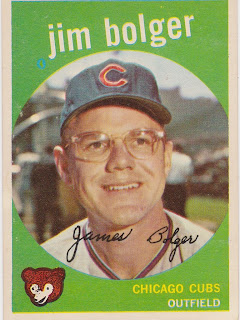 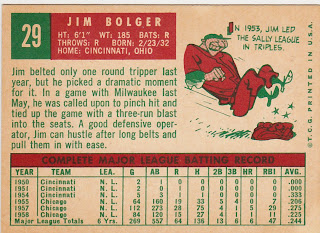 Another in a spate of recent 'hometown' signees, outfielder Jim Bolger was a native of Cincinnati and was signed by the Reds in 1950. Despite being only 18 at the time he saw a bit of action with them that year. He got a couple more looks sandwiched around some impressive minor league seasons but was dealt to the Cubs for 1955 but hit only .207 in 173 at bats.

Another minor league season passed and then in 1957 Bolger enjoyed his best days in the majors. He led the NL pinch hitters with 17 hits and a .354 average. He hit .275 overall for the year. In 1958 he numbers dropped off and he was dealt off to the Indians and then to the Phils getting little action in either place. He spent 3 years in the minors and hit well but never got another shot at the big leagues. He retired to go into private business and still lives in Cincinnati.

Bolger touches on his pinch hitting philosophy and the burden of being a ballplayer wearing glasses in a post on Tom Owens' blog.

My copy is off center but is otherwise in EX shape and I like the green frame. I believe the photo was shot in the Coliseum in LA but I wouldn't put money on it. Might be Seals Stadium.