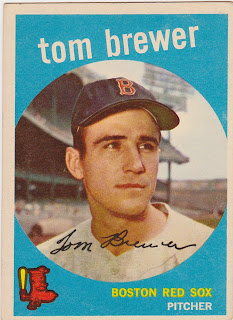 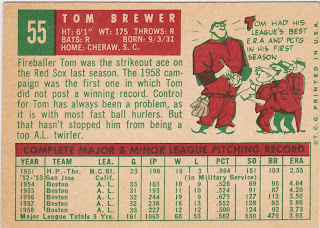 Eight seasons, 91 wins, an All Star Game appearance and his face on a Sports Illustrated cover. Righthander Tom Brewer did pretty well for himself in his big league career. The Red Sox signed him out of Elon University in 1951 and assigned him to their Class D club in High Point, North Carolina where he proceeded to win 19 of 22 decisions.

He spent the next two years in the military (where, according to his mother, he became know as 'Tom' rather than 'Austin' as he was called in his hometown) and when he returned he grabbed a spot in the Sox' rotation and kept it through 1960. He won in double digits every one of those seasons as a starter and had his best year in 1956 when he went 19-9 with an ERA of 3.50 with four shutouts and 15 complete games. That was his All Star year, too. Yes, he gave up three runs in two innings to the National League but he did strike out Duke Snider.

Brewer's numbers fell off in 1961 and he pitched in only two games after June 5 of that year, possible due to an injury.

Tom Brewer facts and stuff: He earned some nice words in the Sports Illustrated issue that included his face (that's him on the bottom row, second from the right). This link will take you to the issue and you can scroll over a few pages for the All Star Game preview article.

Brewer is currently a volunteer pitching coach at his old high school in Cheraw, NC and has had the baseball field there named in his honor. 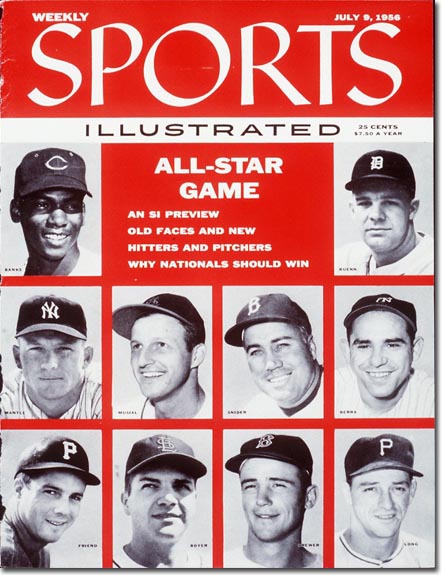 Another routine Yankee Stadium shot with Brewer gazing towards the Yankees' dugout on the first base side. He went 1-4 in the previous two seasons in the Bronx. Maybe he psyched himself out with that stare.