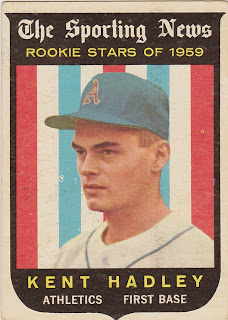 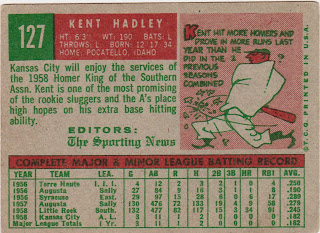 You just never know what you'll find when you follow one of these cards down the rabbit hole. This Kent Hadley rookie is a good example. I figured this would be a straightforward, simple post. Young, power-hitting first baseman comes from Idaho, drafted by the Tigers out of college, traded to the A's, a few years in the minors lead to a taste of the big leagues. He plays a season as a regular before he. like every other Kansas City Athletic in the 50's, gets dealt to the Yanks. He plays a little in NY and then finishes in Japan. End of Story.

Not quite. As I've found, the best stuff doesn't always show up on the first page of a Google search. First there is Hadley's SABR bio which talks in detail about his relationship with legendary college coach Rod Dedeaux at USC. Also there you find stories of his impressive tryout performances which led to his signing by Detroit, Much more of course, SABR is a great resource.

But then I stumbled across a couple of blogs. One is written (as best I can tell) by Hadley's daughter, Lynn. It's not active now but the 27 posts that make up Kent Hadley Idaho Yankee, written in 2009, tell the story on Hadley's life before, during and after his career. Great stuff.

A second blog, written by an Idaho native and journalist, isn't specifically about Hadley but does have an entry about him. What made this special is that it led me to the author's Flickr site dedicated to Hadley. It contains many pics and documents about the ballplayer. Tons of great things to see there including pictures of Hadley and his buddy Roger Maris, who he played alongside in both KC and New York (the two were included in the same trade to the Yanks in 1960).

So now I have a whole new perspective on a guy I'd vaguely heard of from his time with the Yanks. And I discovered his 1960 Topps. It's pink and I love pink cards. I'm adding it to my list of 'wants'. It's much cooler than the '59 rookie. 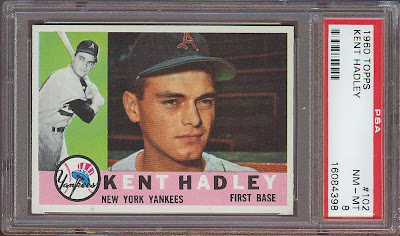