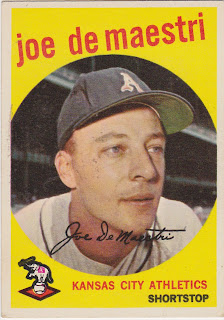 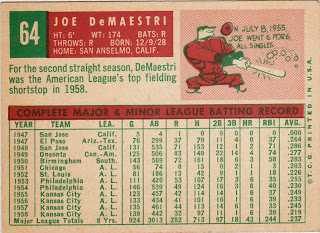 A California kid, Joe DeMaestri signed with the Boston Red Sox in 1946. He spent several years in their system, was drafted away by the White Sox and debuted with them in 1951. He was traded to the Browns for 1952 and then back to the White Sox who, in that same off-season, shipped him to the Philadelphia A's in time for the 1953 season.

It was in Philadelphia that DeMaestri earned a starting shortstop job and he held it for seven seasons. If you look at his numbers over his tenure with the A's you see a pretty consistent if not very spectacular run. He always seemed to hit around .245, knock out 6 to 8 homers and drive in 30 to 40 runs.

His hitting numbers were not what kept him in the lineup though. DeMaestri was among the top fielding shortstops of the 50s, usually finishing at or near the top of several defensive categories. He made the AL All Star team in 1957 but didn't play in the game.

In December of 1959 he was dealt to the Yankees (let's all act surprised) along with Roger Maris and Kent Hadley for Hank Bauer, Don Larsen, Norm Siebern and Marv Throneberry. As part of the Yanks in 1960 and '61 he played on a couple of pennant winners. He played in the 1960 Series but not in the '61 Series. He may not have been included on the Series roster for the Yanks that year. No way to know if he received a ring but he likely got a share of the winner's money as he had been with the Yanks all season.

If you scroll down to the bottom of this Sports Illustrated article from the Baseball Preview issue of 1961 you'll find a story about the 'pebble grounder' that hit Yankee shortstop Tony Kubek in the throat in Game Seven of the 1960 Series. Apparently DeMaestri was going to enter the game as part of a defensive switch for Kubek prior to the inning. Casey Stengel had a change of heart and DeMaestri remained on the bench and saw Bill Virdon's grounder to short play a key role in the Series outcome.

DeMaestri owned a beer distributorship for many years after he retired following the 1961 season.