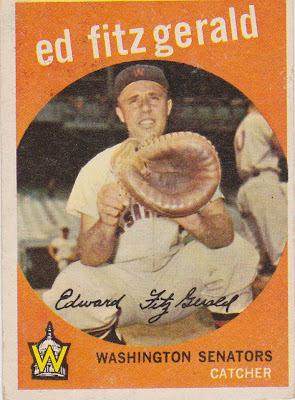 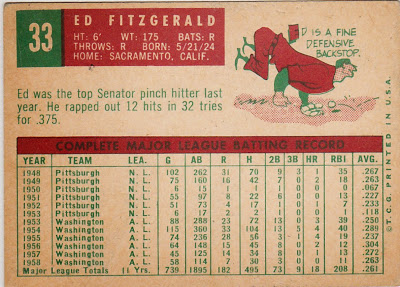 Ed Fitz Gerald was rarely an everyday catcher and never an All Star during his 12 year career. But he certainly had his moments and he was able to put together a quite respectable .271 lifetime average and he gained a reputation as a reliable, strong-armed backstop.

He was signed by the Pirates out of St. Mary's of California in 1946 after serving in the Pacific during WWII. Fitz Gerald hit very well in two minor league seasons before he debuted in '48 with the Buccos. He returned to the minors for most of the 1950 season and was primarily a reserve and pinch-hitter in Pittsburgh until he was sold to the Senators early in the 1953 season.

As a Nat he had a nearly two year run as a starter and then spent 1955 in a platoon situation with Clint Courtney before losing that job in 1956. During his tenure as a starter he had his best season in 1954 when he hit .289 with 40 RBIs.

He remained with the Nats through May of 1959 being used as a pinch-hitter and second catcher. He finished his career with the Indians in '59. The Reds signed and then released him prior to opening day of 1960. In total he had played in over 800 games, hit a career .260 and had thrown out 40% of attempted base stealers.

Fitz Gerald caught Cliff Chambers' no-hitter in 1951. In June of 1958 he broke up Chicago White Sox pitcher Billy Pierce's bid for a perfect game by doubling with two out in the ninth. The ball landed just inches inside the first-base line. Pierce discusses his memories of that day in this blog post. Following his playing days he coached for several different big league teams and managed for a couple of seasons in the minors.

Definitely a Yankee Stadium picture used here. His last name is actually two words which I think is rather unusual. I hadn't noticed until I saw it that way on Baseball Reference and then I looked closer at his card and saw that Topps, which didn't seem all that devoted to such details back then, separated 'fitz' and 'gerald' on the card front. Ed's signature properly reflects the two words as well.
Posted by Commishbob at 6:30 AM