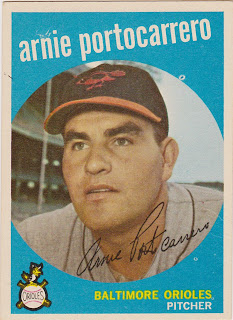 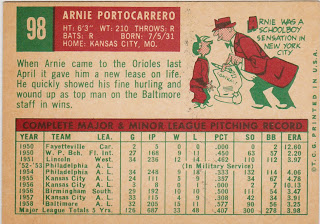 Righty pitcher Arnie Portocarrero was a New York city kid born of Puerto Rican-American descent who signed with the Philadelphia A's in 1949 at the age of 18. Following the pattern we've seen many times here he played a bit in the minors before serving in the military during the Korean War.

When he returned in 1954 he went straight to the majors and claimed a spot in the A's rotation. Making 32 starts Portocarrero went 9-18 with a 4.06 ERA. His hits per inning ratio was good, as was his strike out totals but wildness kept him from having more success. He led the AL with 9 wild pitches.

The following season, with the A's now in KC, saw him get fewer starts but similar results and in 1956 he spent almost the whole season in Birmingham, a Yankee affiliate. I can't find a transaction that sent him to the Yanks, and given the chummy relationship the A's and Yanks had in those days it may well have been a case of a player 'loan'.

He was back in KC in 1957 and didn't see much mound time and was traded to the Orioles prior to 1958. He blossomed there in Baltimore under Paul Richards, at least for one year. On a lousy club he somehow won 15 games and lost only 11 with an ERA of 3.25, easily his best year. He then spent the '59 and '60 seasons trying without success to replicate his banner 1958 campaign. In 1960 he split his pitching between the Orioles and their farm club. He was out of the game by early in the 1961 season.

His obit states that he was involved in amateur baseball in the Kansas City area after his retirement. He died in 1986 at the young age of 54. I came across this article online dated last winter that chronicles an adopted young man's search for his birth parents. It turns out that his father was Arnie Portocarrero.

On this card Arnie is in Yankee Stadium in his home town. I hope his family got to see him pitch there. He got into one game in the Bronx in 1958, the fifth game of the season with a relief appearance. He didn't fair well but his year sure turned out well.