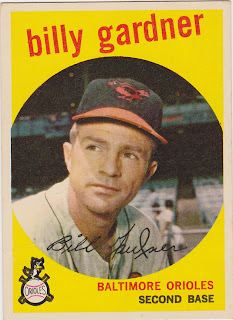 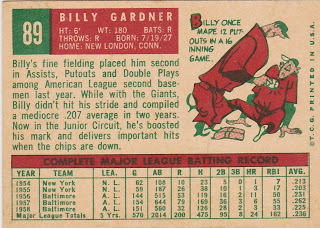 Billy Gardner began playing professional baseball when he signed with the New York Giants as an 18-year-old infielder in 1945. He banged around their chain and spent a year in the military before he finally debuted in 1954. In April of 1956 he was purchased by the Orioles and stepped into the role of starting second-baseman that year.

In 1957 Gardner blossomed and had the best season of his career, batting .262 while playing every game and leading the league in plate appearances and tying for the lead in doubles. He was voted as the Orioles' MVP and in what had become their first .500 season. While in Baltimore Gardner was known as an 'average Joe' who could be found after most home games enjoying steamed crabs at the popular Obrycki's.

Gardner, who was known as 'Shotgun' for his powerful arm spent two more seasons as a regular in Baltimore and then was dealt to the Senators where he continued his regular 2nd base duties. Moving with the team to Minnesota, Gardner was lucky enough to be traded to the powerhouse Yankees in June of that year and as a result he picked up a World Series ring. He pinch hit for Luis Arroyo with two down in the bottom of the ninth in Game Two and lined out to short to end the Reds 6-2 win. But his days as an everyday player were over.

He was traded again, now to the Red Sox, in 1962 and played in Boston for one more season before turning his sights to coaching and managing on both the minor and major league levels. As a manager in the Boston organization he was even able to pick up a few at bats as late as 1971 meaning he had a playing career that spanned three American wars.

Gardner managed the Twins from 1981 though part of 1985 with his best season being a third place finish in the AL West and a .500 record. He took over for the ill Dick Howser with the Royals in 1986 but was replaced late in the year. His son, Billy Jr., continues to be a minor league manager.

The Baltimore Sun had a nice article/interview with Gardner in 2011. He currently lives in his home state of Connecticut and seems to be as 'scrappy' as ever..

It's a pretty ordinary card, yellow frame with a Yankee Stadium shot, but Gardner is an Oriole so that's a big plus.
Posted by Commishbob at 6:00 AM