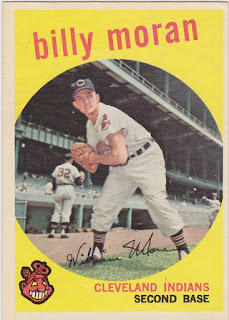 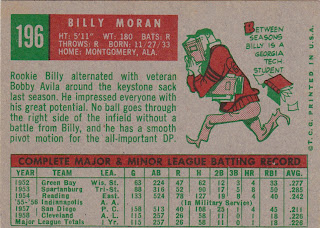 Second-baseman Billy Moran played seven seasons in the bigs and had his best seasons with the fledgling Los Angeles Angels in 1962 and '63. In those two campaigns, his only two as a full time starter, Moran hit .282 and .275 and made the AL All Star squad in '62. He led the league in multiple fielding categories those years as well.
He began his career (and ended it as well) with the Indians. He didn't get many opportunities with Cleveland during either stint with the club, a fact he discussed with Tom Owens in an entry on the fun Baseball by the Letters blog. Check it out.
Kind of a neat card. I like seeing the three decks of Yankee Stadium behind Moran. Reminds me of my many trips there. And Moran is showing off the Indians stirrups which were classic. Behind Moran we can see the Indians' #32 which would be either Chuck Churn or Morrie Martin depending on when this shot was taken in 1958.