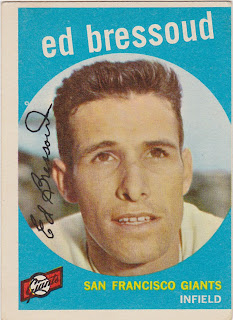 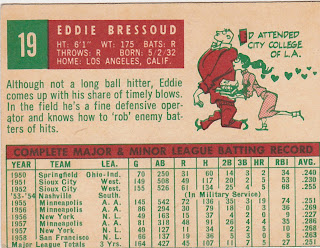 Eddie Bressoud had a long baseball career. Signed by the Giants in 1950 he played three years in their farm system, gave two years to military service and returned to play a couple more seasons in the minors. He debuted with the Giants, still based in New York, in June of 1956. He opened the '57 season back on the farm but returned to the big club in July of that year.

As the team moved west Bressoud gained more playing time at shortstop, playing in over a hundred games in both 1959 and 1960. In 1961 his slick fielding was no longer enough to hold off other competitors for the starting slot and he was relegated back to the bench in place of Jose Pagan.

The Houston Colt '45s took Bressoud as their first expansion pick and them dealt him to the Red Sox. While he missed by a year the chance to play on the Giants' 1962 NL Champs club, he did enjoy his best big league seasons with the Red Sox. He had double digit homers and his best batting averages in three seasons in Fenway. He made the AL All Star squad in 1964 but didn't get into the game, a fact that he was always bitter about. By 1966 however he had been traded to the Mets and then to the Cards for 1967. He got a Series ring and a couple of at bats in the '67 Series against his old Red Sox club.

He managed a year in the minors before becoming a teacher and coach at DeAnza Community College in California. Bressoud has said that despite his success in Boston and that title in St. Louis, he always considered himself as a member of the Giants.

I'm guessing that Bressoud (btw...Baseball Reference gives the pronunciation as 'bruh-sue', with a silent 'D' which means I have had it wrong for 40 50 years) posed for this picture while a member of the New York Giants which would explain the hatless pose chosen. But that could be the Los Angeles Coliseum so, who knows.
Posted by Commishbob at 6:30 AM