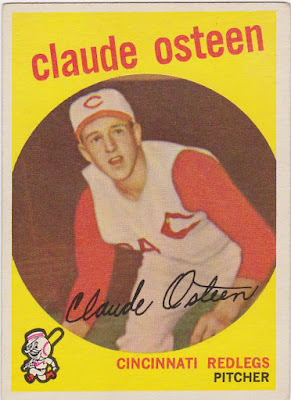 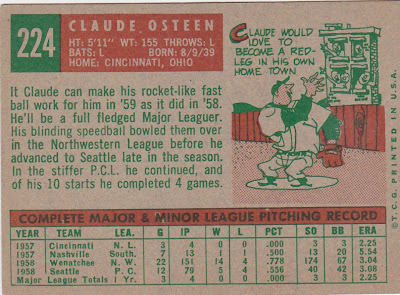 Yup, it's 'Gomer'. Claude Osteen got that nickname because folks thought he resembled TV character Gomer Pyle, played by Jim Nabors. I don't know about that but I do know that for me Osteen was, and always will be, associated with the Dodgers.

Osteen signed with the Reds in 1957 and after a few appearances with their minor league team in Nashville (he was a Tennessee native, btw) found himself pitching with the Reds that very year. He pitched four innings  at the tender age of 17.

Traded to the Dodgers for 1965 in a deal that sent Frank Howard to Washington Osteen established himself  as a workhorse in their rotation as he started 335 games in nine seasons and both won and lost in double digits each season. He twice won 20 games and made three All Star squads. He pitched in both the 1965 and 1966 World Series going 1-2 and winning a championship ring.

He spent '74 with the Astros and Cards and 1975 with the White Sox before calling it a career. After his playing days Osteen served in several coaching capacities and currently lives in Arlington, Texas.

As always some good stuff can be found at SABR and this article from a local Tennessee paper tells some of his story in his own words. Although he pitched in the shadows of more famed teammates like Koufax, Drysdale and Sutton, Claude Osteen had a career he can be proud of.