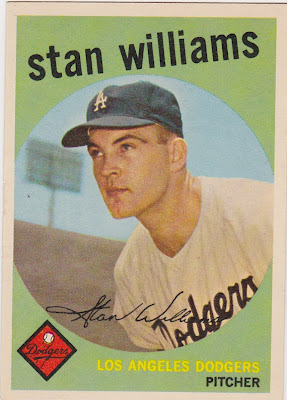 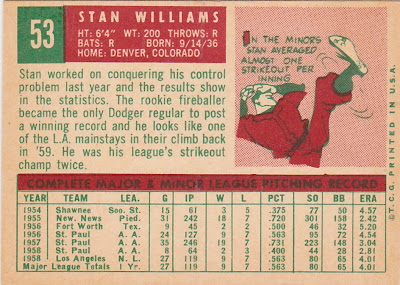 Whoa. Stan Williams, you were a real badass. At least according to everything I've been reading today.

Williams came in as a strong 6'4" 225 lb-ish hard thrower who would just as soon hit you as look at you. Pretty intimidating staff when you consider the Dodgers had Don Drysdale to go along with him. To say nothing of Sandy Koufax.

He came up with the Dodgers in 1958 and pitched mostly as a starter and really came into his own in 1960 with 14 wins. He just about duplicated his numbers the following two seasons before being traded to the Yankees. He had nagging arm problems which dogged him for several seasons. Then suddenly the arm issues disappeared (read his explanation at Tom Owens' Baseball by the Letter blog). Williams morphed into a pretty good reliever with the Indians and Twins.

His best moment in the bigs came in the second 1959 playoff game between the Dodgers and Braves for the NL pennant. Williams pitched three innings of shutout/hitless ball to win the game and the playoff series in the 12th. He earned a Series ring with that Dodger club. He finished up his career with the Red Sox and Cards then did some coaching with the Yankees, Red Sox, Reds and several other clubs.

His '59 card, revealing a youthful but poised major leaguer, looks to me like it was done in a 1959 version of Photoshop. That picture looks like it was laid down over the background. Maybe it was just a smoggy day in L.A.
Posted by Commishbob at 6:30 AM