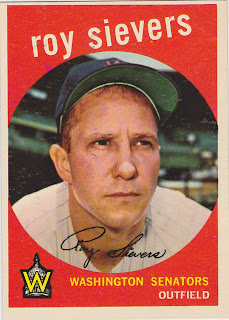 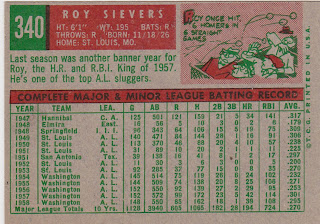 First I need to apologize for giving Roy Sievers the brush-off when I posted his Baseball Thrills card from this set two years ago. That done I'll now try to give his his due with his regular card up in the queue. Fair enough?

In 1947 Sievers signed with his hometown St. Louis Browns and spent two very productive seasons in the minors before an auspicious debut with the Browns in 1949. His 16/91/.306 stat line earned him Rookie of the Year honors and he seemed on his way to stardom in the Gateway City. But it wasn't to be all roses for him. He struggled at the plate and with injuries before he re-established himself, at least to a point, in 1953.

He came oh-so close to being a Baltimore Oriole but he was dealt to the Washington Senators just a few months before the Browns transformed themselves into the Birds in 1954. That trade, btw, although almost understandable at the time (Sievers didn't appear to be capable of recapturing his rookie form), turned out to be a boon for Sievers and a bust for the Orioles.

He became the face of the Senators' franchise while the player sent to the Orioles, Gil Coan, never contributed much in his years' worth of games for Baltimore. Sievers meanwhile flashed the power he had showed in the minors and had six straight seasons for the Nats with 20+ dingers including a league leading 42 in 1957. He also led the league in RBI that year with 114. In his run with the Nats from '54 through '59 he had 176 homers and 565 RBI.

But he wasn't through. Traded to the White Sox in 1960 he put together two more 25+ homer/90+ RBI seasons. He moved over to the Phillies for three seasons and, until his numbers slid in 1964, had a nice run with them as well.

In July of 1964 Sievers was brought back to Washington and played for the expansion Senators until he was released in early 1965. In all he played on four All Star squads and finished in the Top Ten in MVP votes three times. After his playing days he coached for the Reds and managed in the minors before leaving the game to work for Yellow freight. A nice fan page has more on Roy Sievers including stories and quotes.

As you can see from this page Sievers is still active and making appearances.  Looks to be Washington's Griffith Stadium in the background. And the home Nats uni doesn't look airbrushed. Always nice to see a photo taken someplace besides Yankee Stadium.

Roy Sievers appeared on the cover of Sports Illustrated in May of 1958. 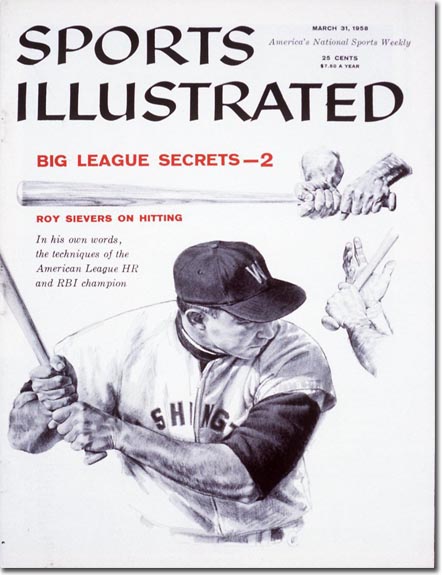