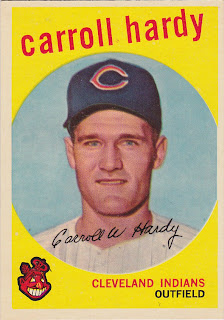 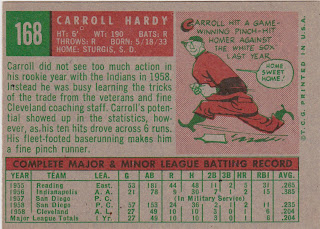 For a guy who only had one real season as a full time player in the majors Carroll Hardy accomplished quite a bit on various athletic fields (and off the field as well).

1) He was All Big 7 Conference in football and baseball at the University of Colorado in the early 50s and also lettered in track. He was named to the CU all-time football team, is the schools all time batting average leader, earned a total of ten varsity letters and is a member of the Buffs' Hall of Fame.

2) He was a third round pick of the San Francisco 49ers in 1955 and played one year catching 12 passes from Y.A. Title, four for touchdowns. He went back to his first love, baseball, after that one season.

3) While with the Boston Red Sox in September of 1960 he became the only player to ever pinch hit for Ted Williams. The story behind that at-bat is a good read on this Boston.com page. He also pinch hit for Carl Yastrzemski and Roger Maris during his career. Hardy hit his first major league homer in that at-bat.

4) He spent most of 1965 through 1968 toiling in the minors but after his baseball days he went to work for the Denver Broncos and, as a player personnel executive, helped shape the famous Orange Crush defense.

All in all Hardy played for four clubs after being signed by the Cleveland Indians in 1955. He only hit .225 for his career that consisted of eight seasons, but he sure has a few stories to tell.

Oh, he also looks like Chuck Connors. Well, sort of.