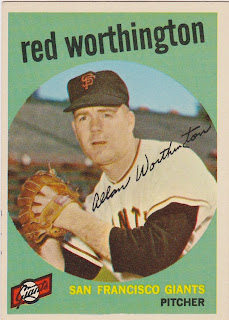 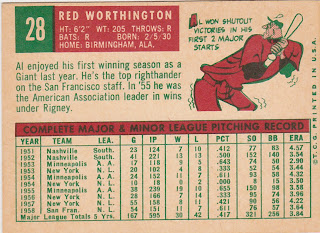 I never remember 'Red' Worthington as 'Red'. He was 'Al' Worthington. But then again I don't remember his pitching for the Giants, only the Twins, so don't go by me.

Anyway, Worthington signed with the Chicago Cubs out of the University of Alabama in 1951. He had led the Crimson Tide to an SEC title and a College World Series berth. After an unremarkable year in the Cubs system he was dealt off to the Giants prior to the 1952 season.

He made his major league debut in July of 1953. Boy, did he ever! Worthington became the first major leaguer to open his career with back-to-back shutouts. He beat the Phils (at home) and the Dodgers (in Flatbush) on July 6 & 11 by identical 6-0 scores. He went on to lose his next eight decisions that year before finishing up with a couple of strong starts to land at 4-8 for the season.

He pitched mostly in the minors for a couple of years before returning as a starter in 1956. He began transitioning into a reliever in 1957. He had a career high 11 wins in 1958 and pitched well in '59 but found himself bounced from the Giants to the Red Sox, White Sox and Reds before finding a plsce with the 1964 Twins and taking over the closer role there.

Between '64 and his retirement at the age of forty following the 1969 season Worthington saved 88 games for the Twins with 37 wins and a 2.62 ERA. Following his playing days he went on the coach the Twins in 1972 under his manager from his Giants days, Bill Rigney. He then spent 13 years as the head coach at Liberty University. His book was published in 2004. In 2011 the Birmingham native was inducted into the Alabama Sports Hall of Fame.

There is just enough red in the background of that picture to ID the scene as Seals Stadium. These seafoam green cards have grown on me since i began blogging this set. This one is in great shape other than the slight yellowing of the cardboard.

Btw... there was another Red Worthington, an outfielder for the Braves and Cards in the early 30s. That Red and Al were not related.
Posted by Commishbob at 11:17 AM